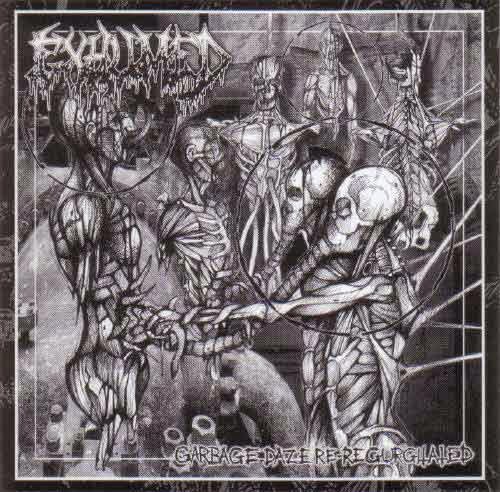 When it comes to a collection of covers like this one, I'm always more interested in hearing how bands can transform tunes that you might not expect into something which sounds naturally their own, rather than just picking a potpourri of popular metal tunes they grew up on and playing them closer to the hilt. To the credit of Exhumed, Garbage Daze Re-Regurgitated isn't just some paean to a who's who of death and grind influences (Carcass, Napalm Death), which would have been obvious. Nope, it reaches pretty far into the realms of punk, thrash, doom and classic hard rock, and while the results are often middling or less than impressive, at least if feels like they didn't wanna put too much thought into selection, but more into creating a 'party' sort of tribute record which remains frantic and fun with a few odd ducks in the row. But ironically, it's some of the metal tracks they cover that seem to work the best, given an injection of visceral energy not unlike what the Californians were pulling off on their first few full-lengths.

The Cure's "A Reflection", which opens this disc, is probably the most out of place; they basically just heavily electrified and harmonized the central melody, a cover of an intro serving as an intro, and it doesn't exactly reflect the 'fun' tone of the majority of choices here. Prevalent are the punk and violent hardcore tunes (Samhain, GBH, Siege, etc), the best of which is probably the brutal chugging and dual growl/snarls used on Amebix' "The Power Remains", though none of these are particularly memorable beyond the fact that they are successful transplants into a medium arguably nastier than their original forms. Where Exhumed excel is once again those harmonies in the bridges and lead, which really breathe fresh air into this track, as well as Master's "Pay to Die" which just fucking rips in their murderous mitts, and is ironically my favorite cover on the disc, despite what I mentioned earlier about how I'd rather the bands stayed out of their stylistic safety zones. The middle of the album does have a pair of semi-safe choices in Zeppelin's "No Quarter" and Metallica's "Trapped Under Ice", they grind up the latter efficiently but I'd have to say neither of these were really among the highlights here.

A couple more West Coast thrash tunes, Sadus' "Twisted Face" and Epidemic's "In Fear We Kill" seem like natural enough fits, but despite being slathered in Matt Harvey's Carcass-esque ravings they lack the visceral punch of their original incarnations. On the other hand, Pentagram's "The Ghoul" sounds just monstrous with the raunchy crunching rhythm guitar tone, baleful harmonies, and the toilet bowl level gore vocals. Unseen Terror's "Uninformed" is the sort of selection I would have expected all over this album, but of all the tunes it takes the least liberties and I'd rather just throw on the original. Then again, that's the case for everything here...songs sound loud, vulgar, and straight to the face, but it all just lacks that carnal punch of Exhumed's original material. Oftentimes you'll get a death metal cover like Cannibal Corpse doing Razor's "Behind Bars" which is surprisingly fun, but here I felt most the moments I was most interested in were the leads, and there are really no strange choices made anywhere except the intro, which is just a brief instrumental. Sounds like the guys had some fun putting this together, and I've certainly heard worse from these sorts of projects, but it's a solid 'pass' from me in the end, I'd rather spin Gore Metal, Slaughtercult or Anatomy is Destiny again than bother.