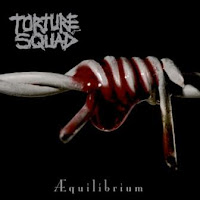 Torture Squad is a band I've occasionally run into through my auditory excursions, usually with the same result. The band will drop an album every few years, develop buzz in a few circles, I'll check out their latest output and find myself quite underwhelmed. This was less the case with the past few efforts, Pandemonium and Hellbound, which showed slightly more promise than I had expected from exposure to the band's late 90s output, and by now the Brazilians are seasoned veterans with 20 years behind (a dozen productive). I can only assume that expectations must be running high for this effort, but I'm not sure if they've been met.

Through Aequilibrium, the band's sixth career full-length, they stick to what they know best: pure riff centrism focused around slower and mid-paced tempos, a gloss of melody and two vocal styles. One that sounds like an abomination of Kreator's Mille Petrozza, Rotting Christ's Takis Solis, and another that represents a horde of nondescript, faceless growlers covering the guttural spectrum. Their material walks the line between the thrash and death genres, with the actual riffing more in the former camp, and the vocals often hinging on the latter, though they throw things in reverse every now and then with a more brutal guitar line or angrier thrash vox. Very often, they'll use both the vocal tones simultaneously, which may contribute some depth to the simplicity of the songwriting, but I don't feel that its much of a benefit.

Musically, I can't say I expected all that much. I've never found the band to quite match the hype that surrounds it, and I fear this is yet another case. They're extremely tight and competent, and I laud their tendency to write simpler rhythms rooted in both the 80s originators and 90s death/thrash obscurities like Protector, Merciless or Assorted Heap, though I'd argue that Torture Squad generate more velocity (if not quality). Strangely enough, the band does not seem to carry much of the Brazilian influence one might expect. The dark tones of early Sepultura, Mutilator, Chakal and Vulcano are rather absent, and Aequilibrium is a compact modernization of the genre which truly relies on its guitars to carry it forward. That's not to say the rhythm section is absent, because there are some great bass and drum fills here and the vital energy runs through all players.

With so much riding on the riffs, it then becomes critical that they be raging and memorable enough to snag the ear on each drive-by, and this is where the album falters. Few thrash acts out there will offer the diversity, the 'complete package' of Torture Squad, and its obvious that the band spent time and effort to compose each of the 8 new originals (I'm not counting the "Last Tunes Blues", a worthless outro before the bonus track). There are capable leads running throughout, often placed into jammy sequences in the middle of tracks like "174" and "Storms", but the actual thrash riffs, as dynamic and polished as they present themselves, are almost unanimously forgettable, whether the primal fundamentals of "Storms" and "Black Sun", or the more death-oriented fare like the sequence initiating "Azazel".

All of Aequilibrium's compositions weave their way through a number of thrifty tempos and the band never seems to run out of ideas, unlike the lions share of modern or 'revival' thrash bands who beat the same drum until violently ejected from the hall, but they just never stick, and though I felt like this might change the more I listened through, I arrived at the same conclusion on the 3rd and 4th listens as the first. The album is too tame to produce the 'feral' energies that I derive the most enjoyment from in this genre, nor is it progressive enough to enthrall through sheer fluid proficiency. The lyrics range from acceptable and cliche-ridden ("Generation Dead" or "Azazel") to just plain weak, as found in the awkward "Raise Your Horns", a silly self-referential track loaded with cliches of growing up a thrasher, failing where a "Thrash 'Till Death" by Destruction was more blunt and successful.

Certainly these Brazilians have a number of positive qualities to them, which makes it all the more frustrating that this effort just doesn't seem to take off. At best, its an inoffensive piece of average thrash metal with a death influence largely delivered in one of the vocal formats. Modern, written and mixed to adequate standards, but lacking both the wild abandon and superb songwriting characteristics that festoon the genre's legends (which usually excel in one or both of these departments). The addition of a new studio take on "The Unholy Spell" from the 2001 album of the same title is welcome here, but I'm positive I'd rather be listening to the past two efforts than this, as they featured a more enduring medium of bone crunching entertainment.