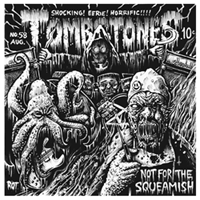 A marriage truly made in the morgue, Tombstones brings together the talent of three veterans (young and old) in the USDM scene for a ghoulish, entertaining excursion into the realm of thrashing death crossover. Most will signify Not for the Squeamish as the return of Stevo Dobbins, vocalist for legendary Texan splattergrind outfit Impetigo, and with good reason. His performance here shows traces of his cult background, but more importantly, the vocals are fierce and disgusting enough to take advantage of the nigh endless slew of razor-edged rhythms provided by his teammates here. Patrick Bruss of Crypticus handles the guitars and bass, and the the riffs are delivered with just as much character as his last solo effort under that handle. Bringing up the rear is Elektrokutioner, he of a thousand underground acts on and off the Razorback roster and its extended family: Decrepitaph, Beyond Hell, and Scaremaker among his most recent exploits.

Combined, the trio pumps out the same sort of horror/foolery you've come to expect from this label and its constituents, with a whopping 16 tracks in just 29 minutes. Half of the cuts here are brief, horror skits done with a 'Crypt Keeper' like narration that introduce the individual, horror basted themes of the actual metal tracks. These are really hit or miss. Certainly it proves the band's honest fascination with all things 80s and before in the horror realm, but rarely are they funny enough to justify their place on the disc. As for the metal tracks, they tend to involve 2-3 pretty decent riffs splattered in Dobbins aggressive voice. It's been 18 years since this guy fronted this sort of record, and he throws it his all, sounding like a pair of drunken morticians vomiting conversations to one another on the phone while they hack up car accident victims and play around in their guts.

I'm not sure how many of the squeamish this record will send fleeing back to the sanctity of their tech death metal, deathcore or other modern favorites among kids into this end of the spectrum, but I do know that its fun enough to warrant attention from anyone acclimated to Razorback's brand of ghoulish horror. In fact, Ghoul, Blood Freak and Crypticus come directly to mind, with their welcome blends of death and thrash, and component hilarity. There's not really a metal song on this album that fails to induce head banging, but I favored some of the violent, fresh mid paced razors like "Elixir of Evil", "Re-ORGAN-Ized", and the hard thrashing "Grave Undertakings" with its deeper vocal barfing. "Roast of the Town" delivers an evil intro of near Slayer proportions, and plenty of grisly bite to boot; while "Horrific Howlings" slowly stomps its imprint on your spine like a parade of were-elephants fleeing from werewolf poachers.

Of course, the band draws its musical influence ripe from the 80s mayhem of Slayer, Repulsion, Possessed, Dark Angel and Hellhammer, so at the base of their crushing exorcisms they're not the most original of acts, but Dobbins vocals and Bruss' hard hitting strings should be ample reason for horror metal aficionados to at least listen through this, if not drop the coin to own it for themselves. Razorback's penchant for keeping things in the family has paid off for them once more, and the three entities compliment one another here, like old friends who had been working together all along. This is no perfect debut, but I found myself smiling and banging my head at its unabashed certainty. I've never been a fan of Impetigo, thinking them worthy of disgusting atmosphere but never of stand-out riffing. But Dobbins is back, like it or not, and hopefully he will continue to develop this new project, because it functions where it matters most, punching you in the gut time and time again with viscera-saturated violence.