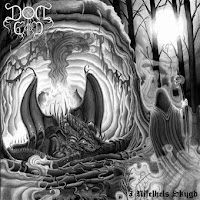 Domgård is a Swedish group with a bit of a sinister history to them, despite their relative dearth of material released up this point. They were formed in the later 90s during the boom of the melodic Swedish black movement that was conquered by acts like Dark Funeral, Dissection, Lord Belial and Marduk, but most of the original members were sentenced to prison time for a church burning incident. By 2004, the band members had been released, but having undergone a large number of lineup change, there is only one member remaining, the multi-instrumental/vocalist Vindskall. A demo was produced that year, and the band participated on a split in 2009, but I Nifelhels Skygd is their first true attack, an hour of material constructed in the melodic traditions of both Norway and Sweden, a healthy mix of Immortal, Dissection, Satyricon, Darkthrone and Emperor.

I Nifelhels Skygd is not an album that first impressed me, though I was immediately taken with its sinister, cavernous atmosphere. I initially found the vocals and riff patterns fairly typical and expectant of a thousand other albums in this genre, but upon further repeats, I must admit that there is a good deal more effort placed into the guitars here than on many like-minded releases. The hedonist and mythical Swedish lyrics make a nice compliment for the band's ability to shift in and out of aggressive, streaming guitars that haunt and harrow the listener, and the mix of the instruments is rough and organic without being excessively necro or brutal to the ears. I won't say I'm big on the vocals, they are average at best, but I think the obvious care taken with the guitars and compositions pushes them well above the precipice of mediocrity that so many traditional black metal bands seem to stumble upon, and though the album is an hour long, it doesn't falter into sweeping segments of ennui induction.

You have intro/outro sequences here which are quite well written. "Austawiauz Sturmaz" fuses tormenting winds, distant percussion and synthesized, brooding horns to a climax of evil, while the title track closes out the album, a beautiful and dark night sky sequence of scintillating, swelling keys that make for a cold ambient lighting. Sandwiched between these poles is the epic bulk of its black metal compositions, starting with the glistening evil notes and driving blast work of "Nidhöggr", which is not one of its best, but good enough that the curiosity is cemented for more. "Det Mörka Trolska Djupet" is suffused with wailing synths against the blooded guitar lines, and some great, raunchy chords that maintain the mid-paced step of the drums in the bridge. "Svartdraugars Likfärd" opens with broiling, menacing acoustic guitars and choked whispers over the lap of water against some far North shore, a titillating experience that erupts into the slightly symphonic and power guitars, one riff of which recycles a Hellhammer/Celtic Frost atmosphere to great effect.

Two of the more epic length tracks deserve some note here, because they are quite successful at creating mood without nullifying the listener's attention span in their 8+ minutes. "Gravlagt i Skymningsrök" transforms a cold, ambient atmosphere into some fist fucking, black nocturnal mayhem riffs, again reminiscent of a Hellhammer or Darkthrone once it gets pumping. "Over Nidafjäll Mot Tomhetens Däld" is slow but sure of itself, quite the beautiful, ice-wrought elegy once you plumb its depths, though a few riffs here do become repetitive to a fault. Other pieces of note include the baleful "Mörkridors Drotting", with yet another nice touch of ambient to the intro, and "Av Muspells Eldar Krönt", a bleak and haunting work with wonderfully evil guitars woven throughout its frosted ballast.

Ultimately, I Nifelhels Skygd does not distance itself far enough or rise above the challenge of the pre-existing fundamentals of its genre, and it feels nothing more than a third or fourth string epic, well composed throughout much of the playtime, but only rarely inciting the spark of malignant inspiration that the classics of the 90s did. However, if you seek to reach back into these years and capture an elusive evil that most modern black metal acts eschew in favor of either cosmic syncopation or necrotic, raw excess, then Domgård might have what you seek. If you could imagine and favor a less enthusiastic Dawn or Dissection fused with the grimmer tastes of early Satyricon and Immortal, then this debut should call to you from the bleak, black and white folk fantasy of its cover art to the mountains and valleys of measured, sharp ice within.

Posted by autothrall at 9:09 AM