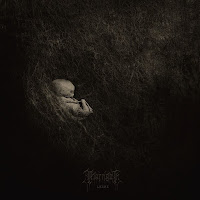 Thorngoth have been slowly but surely developing into one of Germany's most exceptional, traditional black metal artists since the release of their debut Thelema of Destruction in 2007. Not a band to shy away from self-improvement, their followup Rauhnacht was drowned in higher production standards and a mix of faster, Norse violence and evil mid-paced hammering tempered with a slight, graceful penchant for melodies that never indulge themselves beyond the gathering storm. Their latest effort, a nine track concept titled Leere, follows very closely in such weighted footsteps, offering another dynamically pleasing journey into the turbulent terrors and triumphs which only serve to show that black metal is not yet dead, its last fleck of corpse paint not yet shriveled off the face of its bearer and left to mix with human sweat into the dirt.

As my experience with German has been limited to one hot semester at University, I am at a loss to truly describe this concept, but judging from the foetal being that lies amidst the bleak blackness of the cover image, and that 'Leere' is a term like 'void' in English, I could only imagine that the albums individual components and tracks flow together like a study on the interminable transition of life to death, and birth from the same nothingness that the life's blood inevitable withers, dries or spills towards. We are all walking dead, since the moment of conception, striving to mete out the failsafe frolics and pleasures of the flesh and heart before they become null and still, passing the shared world onto the next generation, and Thorngoth's music truly captures this desperation as it segues through thundering, melodic passages and slower, writhing chords like an umbilical chord that grimly asphyxiates the listener's warm, pulsing center.

The riffing style here is perhaps not the most original, and there are similarities borne to a number of artists in the Swedish, Norse and German scene like Dark Funeral, Dark Fortress, Immortal, and earlier Enslaved to name but a few. However, what I truly loved about the album is the very punch of the guitars, with melodies glinting like fresh blood just at the edge, and the rasped vocals of Akhorakil mixed just so perfectly across the top, often spinning into a welcome, deep clean tone that is more than adequate for the somber burden of the chord patterns. Grond is a storm giant behind his kit, but unlike many bands he's not racing to prove he's the swiftest of the drum titans, he is content to let the pace sit right below the tireless walls of Sorath and Vulgrim and then wreak hell upon the atmosphere when it is most suitable.

Though most of the 44+ minutes of Leere will do well to hold your attentions in place as you mentally ruminate about the bleak realities of our cyclical, doomed existence, there are particular points at which the band surges forth with more inspirational writing than the din of its surrounding, like the cavernous, juggernaut momentum of "Leere III", calmly popping out at one point to allow the bassist Corpse to manhandle his strings in a hypnotic pattern. "Leere V" is a slower, resonant piece with a huge wave of guitar tone that cautiously steps forward like a procession of shadowy, undead cavalry, ever in advance towards their next wave of mutilation and soul sucking; the soundtrack to a lost vagrant slowly dying of thirst in the deserts of the Abyss. "Leere VII" leads off with a wonderful riff, salivated over with the glisten of painful but beautiful, reined in melodies before the charge begins; and the closer "Leere VII" is loaded with morose atmosphere and steadily striving sadness in the guitars.

Leere is not your typical ode to Satan and the fallen lords, but one of rapt abandonment and the most vile certainty of impending death upon us all. This is a fairly serious, level record, and while its not the most well endowed as far as individual riffs are concerned, its a wonderful sum bereavement that should thrill seekers of German potential within this genre. There is very little to complain about. A more striking guitar line here or there would not hurt, but this is ultimately a satisfying entry into the vaults of realized misanthropy, a heavy stone grinding upon the axe of temporal, linear life conclusions, sure to both ruin a sunny day and enthrall that dwindling fraction of darkness within every awakened sentient.