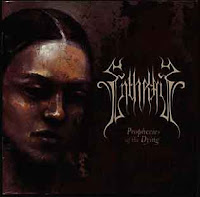 Reaching back into the vaults of the 90s for yet another unsung black metal record out of Scandinavia, Frostscald Records has made yet another wise choice in that of Prophecies of the Dying, the debut from the Norse band Enthral. Similar to the recent Midvinter re-issue, there is some new packaging (though the original cover is intact) here, and the general visibility and availability should be a boon to all those who spent the late 90s drooling over Emperor, Borknagar, Old Man's Child and Dimmu Borgir, without look much beneath the surface of the scene's international ready visage. Also, with the release of their recent EP Spiteful Dirges, the first work of note since the 2003 album Subterranean Movement, it offers a somewhat compelling glimpse at a band whose star has yet to truly rise and align itself with the greats of this underground.

Though the Enthral debut was fairly acclaimed during its original period of release, there were certainly some barriers to entry that might have stood as an obstacle against the more accessible, rapid and punishing structures of the band's national peers. The shortest track here on Prophecies of the Dying is 8 minutes long, and half of them hover around the 11 minute mark. Though this was not uncommon for black metal of the period, and its still a rather expected occurrence, Enthral are not particularly great at occupying such spaces with unending audio savagery or damp melodic bliss, and some can become a chore to slog through. However, within each composition are a number of good rhythms and melodies, and of note is the predominant bass tone here, louder and more present than on many, similar albums of the time. In fact, the rhythm section presents a blazing longship for most of the track list, with the guitars simply serving as oarsmen that row and steer their way through straits and fjords of bleeding sorrow and mournful winds. Originating member Kjetil Hektoen, who serves as studio vocalist here (in addition to drummer), has a pretty average rasp for the genre, effective but no means the central force in composition.

There are six compositions on the original, with a hidden instrumental tucked in at the end, but here on the re-issue they've included a bonus track called "Awaiting the Rise of the Forest God". The original release is an hour long, so that's either plenty of time to become absorbed or become bored out of the skull if you're just not into this style. There is nothing atypical about the form of aggression Enthral shapes: mid to fast paced material, more in the former bracket, with brief spurts of clean, mysterious guitars, an occasional decrepit, whispered tone to the vocals, deep and brooding synths, and other hints that the band were attempting a broader experience than merely a volley of derivative black metal. Added to the aforementioned depth of the bass here, they evoke a slew of sensations not quite the same as your Immortal, Enslaved, or Emperor, yet still within striking distance.

If you can bear its full weight, you'll find that much of Prophecies of the Dying is appreciable enough to have gained further attention in its original release window. Favorites include the storming opener "Saliger er den som Lir", which runs pretty much the entire gamut of the band's range in just over 11 minutes. The two halves of the title track make up for a large percent of the album's pleasure spots, with mystic, wrangling guitar work, eerie backing female vocals, and desperate sadness the highlights of "Part II". The lengthy closer "Thy Passionate Despair" is perhaps the most adventurous with the actual guitars, utilizing several dynamic shifts and vile, twisting note selections to promote an exotic evil. "Enchanted by the Serpent Spell" also features a few moments of inspiration in which the fabric of witchery is given a streaming flesh through the interaction of the dark choral synths and the guitars, and the added track "Awaiting the Forest God" certainly carries its weight enough that I could recommend the re-issue over the album's original release (which you might not find anyway).

This is an engaging enough band, of that there is no doubt, and best listened through when one has the proper attention span, or when one is examining a dark work of art or thumbing through some dense, archaic literature. It lends itself very well to some intangible, past time of darkness, a bland portrait of empty human eyes, an impenetrable wall of occult Romance. However, its not exactly the most striking of black metal records for its time, and thus in retrospect it makes perfect sense that it wouldn't rise above the challenge of that scene. I doubt I'd be able to plow through this material on a normal basis, and honestly I hadn't listened to it more than a few spins in the past, but the re-issue is a great chance for those collecting Norse black metal to potentially hear it for their first time, with its additional boon. 13 years on from its original format, the album is still fairly enticing and fresh, but still lacking as far as its overall sustainability of interest.