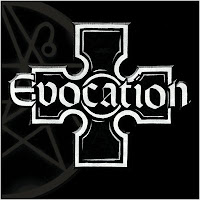 Contrary to what some might think, Evocation is actually not just another in an endless sequence of Swedish death metal throwbacks. The band was initially formed in 1991, and produced two excellent demo tapes in 1992, garnering much label interest before they imploded for personal reasons. Thus, the Evocation compilation released through the defunct Breath of Night records in 2004 is a treat, because for most of us, it's the first time we get to hear this material in a convenient form; and once you have, you will realize just how much damned potential was lost over the years, though thankfully having returned to us in the past decade.

It's no secret that Evocation have the 'Swedish' sound. You could compare them to Grave, Entombed, Dismember and Unleashed, four of the bands ultimately responsible for the tone and songwriting that would influence hundreds of imitators, still to this day. But Evocation had a leg up even on most of the underground competitors back in the 90s, because they wrote great, crushing tracks that were fairly easy to access for newcomers to extreme metal. The chunky guitar tones, dire and bludgeoning vocals from these demos were rendered wonderfully in the studio, and the material is comparable if not superior to many others in that 'second wave' of Swedish death.

The Ancient Gate demo opens with an acoustic passage "A Wind Has Risen" which is set against, you guessed it, the sample of air currents blowing, one of the most widely used aesthetics in all established metal intros. "Through the Darkened Peril" peril takes off with a slew of thick chords that immediately conjure the Left Hand Path atmosphere, if a little less caustic. The band shifts from a grooving rhythm to a faster forward thrust and then some very early Entombed-like, escalating leads before the breakdown. "The Ancient Gate" is packed with somber melodies and crushing, rock grooves which better reflect Clandestine or the later Wolverine Blues. A weighted bass line opts into the blasting, chugged force and melody of "Desolate Spirits" before tearing the listener's head off with a ripping thrash/death force in the verses. Overall, this demo is the far better sounding of the two, with a production that must have been the envy of most unsigned acts of the period.

The second demo included is the Promo 1992, which has a slightly less impressive studio sound. The quality of the songs is comparable, they just don't seem so professionally mixed. "On a Journey to Heaven" crashes and collapses upon a rippling stream of eerie melody, before the minute mark where the band goes all out to bludgeon the fuck out of you with intense force, after which they weave in a great melody line and a truly grisly old school break. "Where the Headstones Shine" rages into an acoustic segue, then lurches into a melodic death/doom section before a keyboard heralds a blasting to come. I felt like this song might have suffered from too many transitions for its own good, but the individual riffs were quite strong. "Veils Were Blown" is less centric towards its melodies, and more about the pure, thrusting death metal, and the closer "Spiritual Affinity" is the best song on the demo, with great drums and amazing, flesh shredding riffs that climax in excellent leads that rally together the sepulchral atmosphere.

As collections go, this is the sort that is hard to beat. You get two superb demos in one simple package, and a chance to explore the back history of one of the genre's best, most understated bands. The only real flaw with Evocation is that they're just not all that original, since several other Swedish bands had already penetrated the market and this one would merely have been sweeping up the debris. But if you're a diehard for this specific sound, they are easily one of the best at actually writing songs that will stick with you to give you a full blast of Left Hand Path or Clandestine worship that is good enough that you'd occasionally listen to it other than those huge, original statements. In fact, despite its age, the music here is as well composed as their two studio albums from the 21st century, with the exception of 1-2 tracks that could have been better organized.