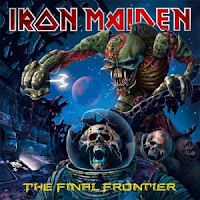 My first impressions of the latest Iron Maiden album en route were unabashedly positive. I'm a bit of a sci-fi nutter, so to see the band returning to this theme was a thrill. The big cover art reveal, the obvious amount of work placed in the cheesy if wonderful launch video, and the fact that the band were reportedly returning to the values that dominated classics like Somewhere in Time or Powerslave. Alas, once hearing a few of the early preview tracks for the record, my expectations started to dim. Like A Matter of Life and Death or Dance of Death before it, it seemed this album was long on loyalty to the band's trademark sound, and another top notch production, but might once again fail to deliver the extremely catchy mementos of years past, from about 1980-1988 when this band ruled the world across all its shores and could not be stopped in the studio.

To be fair, The Final Frontier is in no way a bad or negative album, at least no further than the fact it just doesn't live up to my hopes of one day hearing this band produce an 80s level masterpiece before they fall to arthritis, old age or whatever inevitable horror awaits these brave, tireless men as they parade across stages decades beyond when most bands have cashed in their chips and retired. The boys embrace the far off concepts of their lyrics just as they once did, skirting across both the unknown and historical significance of events past, present and future with the best of intentions. The drawback is simply a failure to deliver on all the fronts necessary to ingrain this music deep into the memory. There are some fairly good stabs at the light here, and the individual musicians are in fine form, in particular Bruce Dickinson. You know what to expect from this man by now, and he does not let you down, offering another of his balanced performances, but the melodies simply do not rise above the din of recent year releases, and the album is ultimately rationed out between the quality of the last two.

"Satellite 15...The Final Frontier" is certainly a tempting intro to the record, opening with a Hawkwind like space rock ministration of guitar feedback and steel wrought NWOBHM chords over pulsing, disappearing synthesizer lines, slowly developing into a melodic charge. It's a fine set-up for the record, but doesn't really capitalize with anything catchy, just an urgent build towards the latter, "Final Frontier" half of the track, a pretty standard melodic rocker without an enormously catchy chorus. "El Dorado" follows in a cloud of Nicko mangling his kit alongside some throwaway guitar noise, before the click and the triplets arrive for another pretty average chord selection that brings to bear the good old feel of a band like Saxon. Once again, though, the big surprise melody never arrives to catapult the song beyond its steady clime. The guitars sound huge, and Bruce is positively diabolic with his sneer, but when he explodes into the higher register, there's just no memorable line to connect the synapses to the steel.

"Mother of Mercy" sounds like any random song from the last album, using some clean guitars and bluesy melodic spikes in the intro, while a calm Dickinson steers the band towards a raging, mid-paced trot. The chorus is yet again lackluster; though the first repetition of the title's track might seem like its going to deliver. "Coming Home" fares slightly better than the previous songs due to the warmth of the descending guitar melody, the flow of Harris' chords, but the rest of the song is sub-standard, with little interesting transpiring outside of that opening guitar line. "The Alchemist" (not the same as the Bruce Dickinson solo track) is one of the better pieces here, a classic Maiden rocker reminiscent of "Be Quick or Be Dead" with a pretty if basic melody in the chorus. Yet, even this is far from the band at their best, and its merely a standout among so many other, drab colors on this canvas.

The latter half of the record sees Maiden lurch into 'epic mode', with the shortest track here being nearly 8 minutes in length. You can hear a few glints of "Rhyme of the Ancient Mariner" influence in "Isle of Avalon", and the extensive clean guitars cede well into the more progressive, jamming segments, but its ultimately incoherent and soon forgotten. "Starblind" has grown on me slightly in a few listens, a desperately melodic track with semi-inspirational leads and some of the better lyrics on The Final Frontier. Easily one of the best new tracks for 2010, but still not delivering the nuclear payload I anticipated. "The Talisman" features about 2-3 minutes of raging awesome against 9 minutes of planning, and "The Man Who Would Be King" has some brush strokes of brilliance amidst its roiling, endless sea of painted momentum, but the bloated finale "When the Wild Wind Blows" delivers nothing beyond an average series of vocal melodies which sound very familiar to the last three records.

The Final Frontier is not an unpleasant experience to sit through, and certainly superior to anything the band released in the Blaze years, or Dance of Death, but I can't claim its on par with the band's one truly enjoyable post-reunion record, Brave New World, because there are just no loaded, emotionally charged singles like a "Wicker Man". This is a case of fine ideas, and the band's typically high class production standards colliding with composition that is merely average. The songs never capitalize on their strengths, the chords lapse into unconsciousness, and you really hope this is not the band's 'final frontier', because there must be something deep inside their spirits that we still need to hear, a muse that has not yet been satisfied. Considering how much value this band has offered me through the years (into the early 90s), the least I can do is cross my fingers and hope for the best next time, and probably the next after that. This time, we've been rationed out a passable effort, neither repugnant nor inspirational, but there in lies the quandary. 'Passable' and 'average' should not be acceptable outcomes for an Iron Maiden record. They never have been. They never will be.