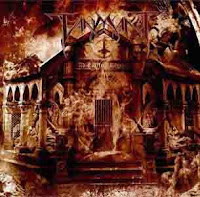 Vanmakt deliver their second outburst with a mix as thick as thieves at the bazaar; loud and resonant and in your face, pretty much the antithesis of the bedroom black metal majority. The guitar tones are both vibrant and caustic; the drums are like a battering ram being thrust against the gates of heaven.

"The Second Key" opens with a haunting acoustic and bluesy lead melody, soon smothered in chugging, death growl/chants and eerie female wails. Then the warfare begins as the drums grind angel wings into abyssal dust. M. Svensson's vocals are a little louder and more abrasive than I'd prefer, more on this later. "Brethren of Lucifer" focuses on some mid-paced thrashing breakdowns to offset the nihilistic blasting. "Endless Myth" has a nice break where you can hear the blasting and bass and then the guitar volley slowly lifts in volume, quite cool. "Re-incarnating Hatred" is just monstrously sick and twisted, hyper black metal, Satanic bass grooving through the vitriolic mesh of octave chords and battery. Other cool tracks include the title with its use of graceful yet horrific melody over the blasts; "Id Xiii Inferni" which is another pure holocaust of unrelenting, hellish wind; "The Ascension" being a nice break from the otherwise very fast album, this is perhaps the best track on the album with some nice atmosphere too it, again the light use of female vocals.

Vanmakt doesn't have the most original of sounds, drawing from the influences of well-produced Swedish and Norse black metal. Still, their sound is pretty rare for the scene today, a fusion of devilish grace and percussive terror. The biggest obstacle for me was the vocals, they had that over the top feel you get from some other artists (usually deathcore or metalcore, but in this case it reminded me a little of Fernando's black metal voice in Moonspell). He doesn't have a bad voice, mind you, but had these been laid back in the mix a fraction, I would have become more immersed in the songs. Otherwise, the music is quite moody and well constructed, and if you favor the professional black metal sound then this is certainly worth a spin.