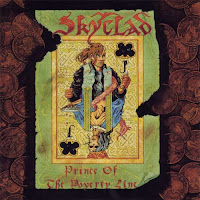 Skyclad was the perfect rebound vehicle for Martin Walkyier after his departure from the legendary Sabbat. Combining his lyrical pun and wit with a hybrid of folk and thrash/speed metal courtesy of Steve Ramsey and Graeme English (themselves veterans of great UK bands like Pariah, Blind Fury and Satan), the band produced a string of five good albums before eventually allowing their folk/pub influence and silly puns overcome the metal balance, resulting in the mediocre, latter half of their career. Prince of the Poverty Line was their 4th full-length and arguably their best.

Essentially, this album was spot on where the band needed to be: a hybrid of Walkyier's past work with Sabbat (speed/thrash metal with quality riffing and his unmistakeable vocals) and the blue blood/pagan/folk aesthetic delivered through Cath Howell's fiddle and violin. "Civil War Dance" is a nice lead-in with some percussive, swaggering folk doused in metal leads and chords. Skyclad were always a fairly political band, and the majority of this album reflects their finer attempts at the lyrical craft:

While sons and daughters of the empire
Stained the map red, white and blue
Back at home the storm clouds thundered
Dole queues lengthened - unrest grew
'til the tides of fresh opinion
Washed away the world they knew.

Walkyier had lost none of his edge from Sabbat, and the vocals here are quite the same. "Cardboard City" is a scorcher with tasteful synthesizers providing a progressive edge. "Sins of Emission" features a fine use of thrashing folk jig, the violins emit a somber note to the flow of verse and chorus. "Land of the Rising Slum" makes a great use of percussion and piano, a powerful mid-paced number with Walkyier at his finest during the hypnotic chorus. "The One Piece Puzzle" is a folk ballad with acoustic guitars until the electrics pound forth for some slowly driving chords. "A Bellyful of Emptiness" is a fun thrasher with a rocking verse using some synths to accent the vocal pattern. "A Dog in the Manger" yet again meshes the thrash with violin highlights and a killer bridge. "Gammadion Seed" erupts forth with blistering speed and an arsenal of excellent riffs and leads, one of the best of Skyclad's entire career, and the most purely 'metal' song for this album.

Hear the cries as freedom dies - the gods of war have woken
A Catherine wheel of fire and steel, the death machine in motion.

"Womb of the Worm" is a powerful, slower track with another epic chorus, Walkyier's unforgettable vocals slathered in chords, synth and some brief female vocals. "The Truth Famine" ends the album with another slow pace, with some great folk riffing.

The mix of the album is dense and balanced, the most effective of their career. None of the myriad of the band's merging styles outshone the others. While this hybrid was already in place with previous works like Jonah's Ark and the A Burnt Offering for the Bone Idol, it was never as effective. Prince of the Poverty Line was one of the most potent works of folk metal in the 90s, and largely because of its unique thematic approach. The lyrics reflect political and urban unrest and a hint of multicultural strife (which is becoming more urgent these days in England), rather than rooting in the folklore and myth of other ethnic European folk metal acts (something Skyclad themselves fancied on earlier albums). It's a great album from a once great band, Walkyier's best material post-Sabbat, and I'd highly recommend picking up all their early work but ignoring anything after Silent Whales of Lunar Sea.

Was just listening to this before the review went up, Sins of Emission hitting a little close to home lately.