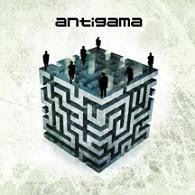 It's not often I can find an engaging grindcore album, so much of it seems like an exercise in the spastic excess of youth. We're heavy and fast because we can be, know what I mean?

While Poland's Antigama does encapsulate the aggressive and spastic tendencies of modern grind and metalcore, they do so with a contemporary depth and a hint of futurism. Jarring jazzy chord structures flow alongside the more traditional bludgeoning and brutal barks and grunts. Their previous album Resonance was decent, and this, their 5th full-length is its equal, if a little more abstract in its chaotic blitzkrieg. Warning is a balance of their grinding slaughterhouse serenades ("Another", "City"), slightly more mathematical blasting ("You Have the Right to Remain Violent", "Lost Skull") and some experimentation, such as the glitch/ambiance of "Sequenzia Dellamorte", the swirling piano jazz/noise hybrid of "Paganini Meets Barbarapex", or the haunting resonance of album closer "Black Planet". The lyrics are minimal in nature, which suits the brief grinding flurries, but unfortunately they're a little more blunt than insightful or poetic (the latter of which would fit in better with this band's aesthetic).

The result here is an album of foresight and some fascination. Note that there are few riffs or singled out tracks on the album which I'd consider 'catchy', it's more of something I'd listen to on the whole as a ceremony of opposites; styles clashed into cohesion. There is a nihilistic and mute warmth to the production which seem to delegate the expressive savagery to a post-modern urban environment. Antigama are on the cutting edge of grind experimentation, and even if they can't hit the ball out of the park, this is an exposive effort you'll want to hang with for a few innings.