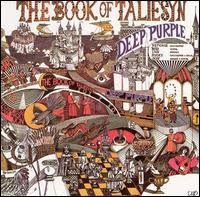 Deep Purple is one of the best examples of a band who transformed from the very pinnacle of excellence (i.e. their early work) to the blackest, deepest pit of suck when they decided to start writing mainstream rock in the 80s. Stormbringer was pretty much the cutoff for me, and I try to envision a world in which the band ceased to exist after that. Conversely, I feel the band has been criminally underrated during its first decade, aside from "Smoke on the Water" and maybe "Highway Star", there are a lot of empty stares and blank check faces when it comes to this band. An unbearable travesty, seeing that they released an impressive list of albums in the 70s. The Book of Taliesyn is their second, named for the Welsh poet.

One of the fascinating things about this album was that a large chunk of it consists of covers. Neil Diamond's "Kentucky Woman" is given a groovy rocking spin with some nice organ solos. Ike & Tina Turners' "River Deep Mountain High" is recreated with love, in fact I'd consider this the de facto version, Rod Evans' vocals do it a dirty psychedelic justice. The other cover here is the Beatles' "We Can Work It Out" which comes in after the original "Exposition". This is likewise given the Purple treatment with a soulful but harder rocking style, full of 'freak out'.

As for the originals, each is a memorable slice of psychedelic rock with a dash DP's prototypical heavy metal leanings. "Listen, Learn, Read On" has some fuzzy, deep guitar grooves as it meanders between funk soul and searing rock & roll. Not far from The Doors, really, a vibe that persists throughout the album. Instrumental "Wring That Neck" steps in with a dual organ/guitar blues over a stepping bassline, it proceeds to burn through some solos and has a very live, raw feeling to it. "Exposition" is another instrumental, with more of an epic, shuffling soundtrack vibe. Killer organs and driving percussion define its thundering scope. "Shield" is one of my favorites, a mellow song with some percussive guitar picking simmered in pianos and moody vocal lines, lifting up slightly for its chorus. The final original track "Anthem" is highly bluesy and atmospheric, but possessing a majestic chorus. Sounds like the Doors and Beatles jamming with a really cool keyboard and violin bridge. Ritchie Blackmore and Jon Lord are all over this album.

And that's really the gist of it. If you fancy 60s-70s psychedelic rock which would help lay the foundation for the harder and heavier styles to come, you will find it worthwhile to track down just about anything Deep Purple previous to 1980. The Book of Taliesyn succeeds despite a rather large percentage of cover material, which was fairy common practice for an album in those days. It does share some similarities to other popular rock bands of its era: The Who, The Doors, The Beatles, Led Zeppelin. If you have a natural attraction to this style, but missed Purple (they were never quite as popular), you should seriously think about tracking this down, as well as Shades of Deep Purple, In Rock, Fireball, Machine Head and the amazing Concerto for Group and Orchestra. Despite their age, they all sound great to this day.