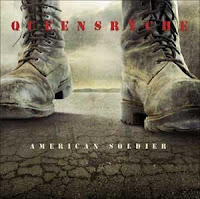 As if Operation Mindcrime II weren't enough punishment for the masses of poor fans who longed for a glint of hope along the Queen's sodden path of mediocrity, we have now been inundated with this stinking heap of shit. And it doesn't take long for the odors to snake themselves about you.

I don't know what in the name of FUCK would prompt Geoff Tate and company to incorporate hip hop stereotypes into their songwriting. I mean...why? I understand this is a concept album about the US military, but listen to the hip hop bullshit that dominates opening track "Sliver". Was this meant to be a drill sergeant like Jamie Foxx in Jarhead? The shitty lyrics make the music simply unlistenable. This wouldn't have even been cool in 1992 you fools. "Unafraid" is like some unusable outtake from "Empire" complete with groovy sludge bass and samples that just don't sound good. "Hundred Mile Stare" has some nice vocal melodies to it, an uplifting ballad which sounds like any random song off Tribe. It's not as terrible as most of this, so I'll include a few points to cover it. But then of course it's followed by ANOTHER balladic track "At 30 Thousand Ft." "A Dead Man's Words" is spoiled by a dull note selection and more hoo haa shouting by whatever alter ego Tate is performing from. "Middle of Hell" is...you got it...another slower paced track with samples. "Home Again" is ANOTHER shitty ballad, this time featuring a child vocalist in its letter to daddy overseas.

Where's the fucking metal? It does not exist here. How could these be the same people that wrote "Eyes of a Stranger" or "Surgical Strike"? The truly saddening thing about American Soldier is that it's not the concept which reeks (I especially like the idea of exploring military relationships and marital betrayal), but the delivery. In addition, it's the waste of a perfectly good voice, because Tate still has that silky feeling to his chords which would lend itself quite nicely to actual songs of worth. In the end, the album is mildly superior to Operation Mindcrime II, this time it's like the reek of movie theater restroom rather than outhouse.