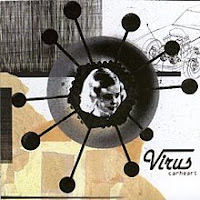 I first encountered this album in early 2004 after finding it in a stack in the basement jam room of a drummer i was playing with, and had no idea what it was, thinking that it looked like some sort of alternative rock or post-hardcore record. When inquiring about it, he told me it was the new project of Ved Buens Ende, who I had already been exposed to, and thus I was intrigued enough to take it home, check it out, and then never really look back. The band's unusual stylistic interpretation of groovy, maudlin post-metal was one of a kind, aesthetically informed by everything from jazz to noise rock to a heavy smattering of Voivod in the bass, guitar and vocal departments, and being that that was one of if not my fave band in the world at that time, I was delighted to hear something new take any kind of related approach...

Carheart is the record I've had the most time to gel with, and fascinatingly, while there have been small evolutions in the band's sound over the four albums and two EPs, it's surprising how early they sort of found their niche and rarely ever wandered away from it. Not that I'm complaining, because this was such an unusual concoction in the first place, and the song quality itself would improve for their last two full-lengths, but they could put together a playlist or live set of anything in their output and it would flow pretty smoothly together. Thick, barreling bass grooves serve as alchemic constant, from which just about everything else flows, unless they're taking a pause to let the guitars' jangly, hazy dissonant note patterns. The drums are very rock & jazz oriented, a nice construct in which to settle the endless curving low end note patterns and their haunted, unnerving upper strings, and they will occasionally cycle in some additional percussion to clap and snap along. To top that all off, you have Czral switching between two vocal patterns, one very haughty sounding and the other more drugged, monotonous and subliminal, which creates this dope-addled atmosphere which sounds like you're hearing this in a dazed state after having your tonsils removed.

Within that range, I will say there's a good degree of versatility. Maybe not as much as something like a Primus album, but some tunes will go a little more moody and eerie, like "Road", letting the guitar and it's drizzly, slightly-twanged out tone take the fore. Others like "Gum, Meet, Mother", go for a more technical and proficient pacing which is sure to keep you glued to its subtleties as that almost numbing, fat bass tone collides with all the little distorted intricacies. In fact, Carheart is arguably the Norwegians' most varied effort just in terms of its rhythm and weird vocals, even lapsing for a pure ambient piece like "Dogs With Wheels" to break up the successions of vertigo-inducing rhythm. Once upon a time, I considered this my least favorite of their output, but I think through the years it has grown on me as one of the more monumental progressions of a formerly black metal or black metal adjacent act from this scene, and nowadays I like it more than the sophomore, The Black Flux, although that's also quite good. I would easily recommend this stuff to fans of Solefald, Ihsahn, Dodheimsgard, Ulver, Arcturus and the like, just as much as I'd offer it to a fan of Voivod or their fellow Canadians NoMeansNo. Exceptional, creative, deconstructive, timeless music seeped in evocative lyrical minimalism.