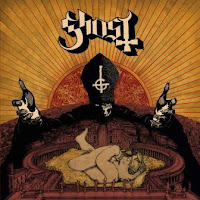 Opus Eponymous was an album that I found immediately distinct, enjoyable on the first listen, and it only got BETTER from there, so I was a paid passenger on the hype train around Ghost as it climbed the steep track towards international recognition. Naturally, there were some major expectations for its followup, and perhaps those were premature on such a novel act, as Infestissumam came along and hadn't a fraction of the same impact on me as its predecessor. I wouldn't say that I've ever 'struggled' with this sophomore, it's a pleasant enough progression of the concepts they had already laid out before us, but with the exception of a handful of tracks, I didn't find the material here so indispensable, and even on many repeated listens this remains my least favorite of the Swedes' full-lengths. Now, having said that, this one has continued to grow on me in the intervening years such that I still keep it on a semi-regular rotation, especially four particular songs and the second bonus track.

It's instantly clear that Tobias and company were attempting to ramp up the theatrics of their stage personas through the studio component, evident through the fact that the album sounds like you're sitting in a mock Church, complete with bloodstained glass and Luciferian hymnals, surrounding by a carnival on all sides. The organs and other trappings beyond the standard metal instrumentation are whimsical and subtly sinister. There's a wide array of rhythmic exploration which feels light and airy, like a troupe of inverted Christian hippies traipsing down a hillside tossing beach balls to and fro. I would assert that Infestissumam was the band's most progressive offering, covering more new ground than any of its successors (to date), even if it wasn't able to form that into the catchiest of individual tracks. That's not to say you won't hear ear candy-larva burrowing through the DNA of a lot of the songs, but to me the smoothness of how the production locks it all together lacks a little of the power and menace I felt from the debut. The overt influence of your favorite Danish metal royalty and escapist New York hard rock of the 70s and 80s is still present, but a wider net has been cast.

It's eccentricity and all-over-the-place-ness is a positive. For instance, the album doesn't really lose any points from me for shifting between the safe psychedelic pasture-rock and the haunted house rockabilly of "Ghuleh/Zombie Queen", one of my personal favorites here. "Year Zero" is an undeniable strong point with its creepy verse vocals and development towards its sweeping operatic chorus. "Depths of Satan's Eyes" sounds like a track cultivated from Opus Eponymous' outtakes, and the closer of the album proper, "Monstrance Clock" is another highlight with its oozing synth lines, eerie organ breaks, and another of Tobias' wonderful vocal performances. I mean there's a good EP's worth of kickass material that rivals anything else the band has released. To boot, the bonus tunes on the Deluxe edition are quite good, especially the cover of ABBA's "I'm a Marionette". I mean mock the source all you want, their catalog is just perfectly fertile ground for a group like Ghost to come along and transform into their own designs, and this song does it wonderfully. I would probably purchase an entire album of ABBA covers by this group.

I think where this one sinks for me is that it front-loads some of its weaker tracks. "Per Aspera Ad Inferi" has a few high points but doesn't quite deliver on its initial promise, and "Secular Haze", one of the most popular tunes here with its circus-like march, falls short of its potential. "Jigolo Har Migiddo" is fun enough, but doesn't really tickle me until the bridge. The guitars here, while active and occasionally inventive, seem to take a back seat to the vocal production and synthesizers, not to mention the bass which sometimes seems to overpower them. I felt as if the debut was more directly driven by the riffs, whereas here they only occasionally poke out, but when they do, as in the kickoff to "Zombie Queen", they're great. Tobias' vocal production here is quite involved, with a lot of harmonies, but again some of the melodies just don't hit the catchiest patterns and seem to play it a little too obvious rather than hitting you with some unexpected, unforgettable note progression.

Elsewhere, the aesthetics are quite nice. The song titles interesting, the Satanic lyrics hold up through a number of readings, and the artwork a nice continuation from the debut. The flimsy Universal digisleeve edition of the CD sucks, and I recommend avoiding it and tracking down a Deluxe with those bonus tracks that actually add a good amount of value to Infestissumam on the whole. There is no question that this was an important transitional step for the Swedes. Sure, I might like Meliora a lot more, but without this I don't think Ghost would have necessarily gotten there. So for that, and the quartet of originals that really resonates with me, I do think this is an interesting album with enough qualities to recommend, and I'm not surprised that a lot of the band's fans see is as their personal favorite.