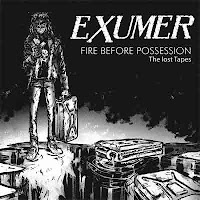 There is occasionally a charm to a band's earlier recordings, before they got bigger and hit the studio for a more professional stab at stardom. Now, how much 'bigger' Germany's Exumer ever got is in debate, but the band would go on to release a couple cult 80s thrash records, and then reform way in the future for an even more steady and productive phase in their career. Fire Beyond Possession: The Lost Tapes is a humble collection of recordings that narrowly predate their debut, and of course are delivered in a much rougher fashion, though they've been remixed so that they can sound at least tolerable through your speakers in the 21st century. Here is a case where one can certainly experience that 'charm' I mentioned, but there are some notable flaws that no amount of mastering is going to fix, and slightly mar the personality that the music was going for.

Now the material is here is literally 8/9ths of the Possessed by Fire debut album, as you might have guessed from this thing's title, and most of that is raw demo quality. I actually dig the mix quite a lot, with the crazy amount of reverb on Mem von Stein's vocals, and he sounds a lot crazier on these recordings, almost like a mix of early 80s Petrozza, Angelripper and Tom Araya. The rhythm guitar sounds pretty driving and awesome, and the drums very splashy, with the bass present enough to add some beef to the tunes, if not anything more interesting. I do think the lead guitar passages are a bit loud, and like a lot of these old takes it feels very compressed and muffled due to the tape transfer. I also felt a few points where something seemed to cut out a little in one or the other speaker but I suppose that's to be expected from this sort of throwback production. I can't imagine that I would ever listen to this over Possessed by Fire, an album I dig, just not as much as other thrash worshipers, but even in these more primitive passes the material sounds energetic and thriving, it simply does not stand out stylistically or by composition as much as the band's more popular peers did.

I would have liked it if they included the entire original demo, A Mortal in Black as a bonus there, one of the tracks is missing, but you're getting two of those songs anyways. Or maybe a couple of rare, unreleased tunes that never saw the light (maybe they all did, I have no idea). But for a limited press, to the few folks that will actually want their hands on this (it was originally tapes that the group just handed out to people), there's nothing really wrong with this release. It would do little but gather some dust for me, but if you're really in love with that debut album and want to hear it in a more rough around the edges or live context, this might be something you want to buy on CD or 12" vinyl and toss into your collection.