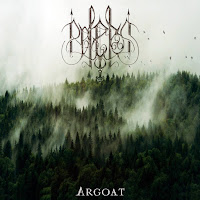 Another stalwart of French darkness, Loïc Cellier, aka Belenos, has been serving from the black metal cauldron for going on almost 25 years, with a number of records like 2002's Spicilège which have generated their fair share of underground buzz. That particular disc is also my favorite of his catalog, but I've often had mixed feelings about some of the other material. Clearly for a one-man band this guy goes all out, he's talented on all the instruments, and to that extent I have to give him the utmost respect. His vocals are also quite good, between the rasping, deeper throat singing, and broad  chants that grace a lot of the album, giving it a strong sense of contrast and dynamics while the instruments surge along. But when it comes to memorable songwriting I've felt mixed results.

The production here on Argoat, his 7th full-length (excluding the 2009 re-recording of Errances oniriques) is like bottled thunder, with a forceful-low end feel that is even carried through the more melodic guitars, distributed in a dense but clear tone that amply reveals every passionate progression of notes. There is constantly a lot happening in a Belenos track, consistently strewn between faster blasted passages and glorious mid-paced segments which seem to me like a more complex parallel you might hear from a Franco-Bathory of the late 80s-Viking metal era. Lots of places where the individual riffs or instruments are allowed to shine, such as breaks where some strong new guitar melody will be woven into the affair, or some calmer acoustic parts where the drums will still barrel right along for yet another interesting contrast. Despite the overall package, he also manages to keep the tunes rather confined to 5-7 minute song lengths here, so no real chance to get bored with all that he is packing into each of them.

That said, there is a degree of formulaic sameness to a lot of the individual riff patterns as well as the aesthetic impact of the tracks, all very solid when listened to as a whole, but I don't know that many of the tunes really stand out from one another. Maybe "Dishualder" with its atmospheric, folksy intro, which frankly is so good that I wish he had included more such material on the album; or the briefer closing piece "Arvestal" which has a decent Medieval swagger and some of the more overt chanted clean vocals on the whole disc. But it does feel like some of the highlights I'd pick out in one tune are also present in other tunes, and at 53 minutes it goes a little past the point where it feels resonant or fresh. Still, I won't deny that you can lose yourself to the style Cellier manifests, in particular if you are fond of Celtic black metal like Morrigan, or the wave of French Medieval black metallers like Véhémence and Aorlhac which might have a bit of Belenos influence in their musical DNA. Argoat is competent and confident, just not extraordinary.