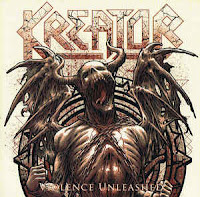 Violence Unleashed was an EP pressed in both CD and vinyl formats which was to serve as a teaser for Kreator's great Gods of Violence album, released about a month after this one. A common practice for a lot of these larger reach, multi-decade veteran acts, although I can't tell you whether or not it's a successful one these days, since everything is just accessible online and a lot of folks have abandoned collecting physical media altogether. The Jan Meininghaus illustration is pretty basic but pretty good, tying in with the full-length, and for what it's worth you're getting nearly a half hour of content...none of which is particularly exclusive to this release, which as always, when you're looking for a hot new EP of content, a total fucking bummer.

You've got "Gods of Violence" itself leading this off, which I've already discussed elsewhere, and then the cover of Maiden's "Number of the Beast", which is pretty well done, but already available on Phantom Antichrist and the original Big Teutonic 4 split. "Wolfchild" is the one song I was not already familiar with, and it's a decent one, sort of a brisk heavy metal joint with Mille's distinct presence and a good flow to it all, erupting into the layered harmonies the band was sweet on for their last couple albums. Apparently this tune was also on the single for "Civilization Collapse", but new to me and the one thing here that doesn't feel too trite. "Iron Destiny" is another decent song, another Phantom Antichrist bonus cut, but probably unheard by many. It's a slower to mid-paced track, also with a heavy metal foundation, not terribly memorable riffs but if you're into this more glorious era of mature Kreator I can't imagine you wouldn't like it, especially the Maiden-like bridge.

Lastly, some live cuts of "Phobia" and "Violent Revolution" which are pretty useless to me since I've got the version of Gods of Violence which has the bonus live CD/DVD that includes them and more. Honestly the version of "Phobia" is a little silly, Mille sounds like he's losing his voice for part of it. But really, these are unnecessary editions to a fairly lame release that doesn't have much reason to exist other than as a promotional tool. Had Kreator maybe included an alternate version of "Gods of Violence", 3-4 unreleased studio tracks and then maybe "Wolfchild" for good measure, this might be a thing of beauty, but as it stands I have no reason whatsoever to revisit it beyond just that one song, and it's a hollow product that nobody's ever going to revere like they used to when bands put out EPs back in the earlier metal decades, where they were pretty important releases that built up their own cult followings and were often full of great original material.