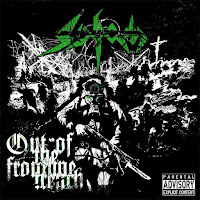 Out of the Frontline is the third Sodom EP to release after the surprisingly great Decision Day in 2016, and one wonders if the momentum of the band's legendary aura after almost 40 years of thrashing has become such that they could exist on these sorts of releases indefinitely, or if they're just lazily hashing out a bunch of pieces to their next full-length album. Which, to be honest, would not be such a bad thing, because most of the newer material I've heard on discs like this one, Partisan, etc is fairly worthwhile, keeping up the traditions and maybe occasionally hurling a new riff or too your way when they can come up with one. I mean none of these short-form releases have been the equal of 1987's Expurse of Sodomy EP, but I'm in no rush to throw them out the window.

This time out you get abused with a trio of new tracks before any of the tomfoolery begins. "Genesis XIX", "Down on Your Knees" and "Out of the Frontline Trench" are all nasty, dirty thrashers which I can't deny enjoying...there's a clear beeline back to Agent Orange and Persecution Mania in how they are composed, with choppy riffs being sauced in wicked sounding Angelripper vocal lines, material that seems it was conceived in the 80s with little tremolo picked parts, brief effective leads and just a vicious overall tone to it that leads me to believe the next time we get a full-length album it's going to be one that clearly looks backwards to the same era. In other words, I could argue that these three cuts are better than almost anything the band has put out in the last 25-30 years just by virtue of the style they were conceived in. To enforce the point, they've also included a re-recording of "Agent Orange", which doesn't sound half-bad...it's extremely loyal but has that slightly more modern sort of production which is present on the new originals, and I'd be lying if I told you I ever got tired of hearing this track...one of my faves.

Lastly you get a live rendition of "Bombenhagel". Again, living up the past...what you hinting at here, Tom? It sounds fairly good too, fresh and violent as the day it was birthed to the stage, and the contrasts between the blitzing thrash assault and the more anthemic bridge with its melody are fully present on the stage. While that could have been left off here, and I would have accepted just the new tunes and the new "Agent Orange", it doesn't kill the cohesive feel all that much. But yeah, this is a pretty good EP, nothing too original but I think those of us who have been waiting most of our lives to hear Sodom give it that real mid-to-late 80s Teutonic thrash appeal again will be satisfied. I know it's still remained there in fragments of their sound on every album since then, some more than others, but this stuff is really shaping up to be what might have happened before or after Better Off Dead if the band hadn't gone for the more bruising sound on Tapping the Vein (nothing wrong with that album, mind you).