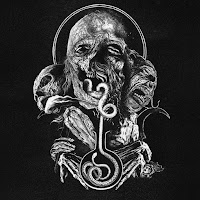 I haven't run across a ton of Russian atmospheric blackened death (or 'deathened black') through the years, but considering just how much that scene is expanding in all directions metallic, I imagine I'll be encountering more acts akin to Vhorthax in the future. And that's something I'll consider a net positive, because this is a fairly cool EP which strips its influences straight down to their roots and then adds some personality through the vocal embellishments laid out all over the guitars. I guess a general way to describe the sound here is a primitive, roots, thundering black metal akin to Finland's Barathrum interspersed with pure OSDM tremolo picked passages and then bursts of acceleration that move into a Canadian war metal terrain, with the added nuance of some memorable dissonant breaks in what would generally prove a familiar series of chord patterns, that don't exactly grow tired here, but also don't really thrill on an individual level.

But yes, it's those vocals...from the broad guttural that drives most of the songs to the selection of splattered snarls, howls or even cleaner, monk-like chants that are dispersed throughout the tunes, never overused but occasionally doubled up with the growls or layered together to create a beastly, gruesome clamor or voices. Extremely well done, and almost always lending personality to a musical construct which wouldn't be terribly distinct otherwise. The riffs in excellently titled tracks like "The Levitating Tomb" sound good due to the resonant, potent production of the guitars, and the drums throughout the entire experience are leaden and effective, but on their own these elements wouldn't fulfill without those enormous growls that create a cavernous environment in which the guitars can wind their evil more efficiently. Bookended by a great pair of dark, ritualistic ambient pieces ("Altar II" being the more intense of the two), Nether Darkness is a work that sounds PRECISELY as it is titled, and is worth tracking down if you're a devotee of the past decade's return to the lowest, ugliest and most sublime of evils, seamlessly integrate its death and black halves into the aural effluvium of its murky conception.