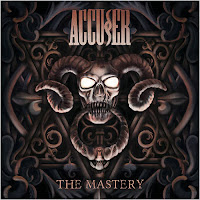 Accu§er's second full-length for Metal Blade records dials back a little of that groove/thrash influence which had survived by a thread since their 90s era, and instead seems like a block of structured, pure Bay Area thrash tempered with a few fragments of the staple Germanic go-to's. In particular it's the vocals which continue to remind me of a less grating, charming Tom Angelripper which cause me to make that comparison, but I think some of the more clinical mute picked harmonies here also possess some faint similarities to late 80s Destruction, Vendetta and Deathrow, and they use these as points of interest in a number of the tracks here which might seem blander without them, although the overall impression of The Mastery is that it's not truth in advertising.

It's a solid effort, unquestionable, and belongs in a career cluster with the three preceding it, but while this isn't technically a samey, unanimous record in terms of riff construction, a lot of the tunes seemed to bleed together for me, and it grow a little dull despite the energy on exhibit. The vocals rarely spit out anything of interest, lack a real sense of grit and anger even compared to The Forlorn Divide, and sometimes they even seem an afterthought to the riffing rather than a complement to it. The mix of the instruments is admittedly more level than on the last album, but I feel that it lacks the dynamic range, especially the bass and the depth of the palm muted parts. The bridges and leads here are still quite competent, but they seem a little less emotionally resonant, or drier than those from 2016. A couple epic moments, in tunes like "My Skin" and "Time for Silence", keep this one far above the slag heap that represented their career from Double Talk to Agitation, but it's not as formidable as Diabolic or The Forlorn Divide and grinds the band's upward momentum to a halt, without spilling them off the side of the highway overpass. Not the best of their resurgence era, but competent, and void of any truly jarring flaws. Folks into later Testament, Defiance, Warbringer, or Exodus could find enough meat to gnaw on here.