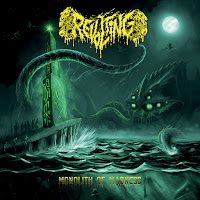 I wish I could numerate Rogga's death metal records so that when reviewing them I could mumble about how this was the *****th iteration of his career, but let's just settle with the fact that whether or not you dig his projects, this Swede is an utter institution unto himself and shows no signs of slowing down. Revolting is one of his bands, similar to a Paganizer or Ribspreader, which represents the 'core' of his sound, that is to say traditional Swedish death of the early to mid 90s laden with melodies and then slight variations from project to project...one might be more brutal, another a little more thrashing, another doomy, and so forth. It's also one of his myriad bands that I've found most successful at delivering a consistent quality, even if that comes at the expense of originality, innovation, etc. I'm not implying that Revolting is exceptional or unique in any way, nor have they produced any death metal masterworks, but if you're seeking another album to remind you of those glorious years when Entombed and Dismember were first breaking out into international audiences, you could do a lot worse than randomly shuffle through this particular discography.

The 6th album, Monolith of Madness, while not the best of this project, is entirely competent death metal driven by d-beats and Floridian tremolo picking runs sodden with the downcast melodies that his forebears first manifest in the later 80s when they were spitting out demo material. It's never quite as evil as it looks like on the cover with its Cthulhu kraken and accompanying...witches on brooms...but you get a fair balance of forward propulsion, churning grooves and proficient leads that favor mood and atmosphere over flash and flair. I do feel like the bulk of the songs here can lapse into samey passages, almost all of which involve the same damn beat at some point, so more work could be done on intros, bridges and so forth to really round them out and distinguish them better from their neighbors, but I think at this point you know exactly what you're getting on a Rogga album, and if you've come this far listening to the guy then you might not even be interested in him varying up the formula much, at least not internally to one band, since he does this form project to project to mirror varying influences or 'eras' in death metal that he wishes to pay tribute.

You know what to expect. That's both the strength and weakness, because while this is written and performed at no less a level as a couple dozen other Swedish throwback bands that populate the F.D.A. Records imprint and its peers, there is probably not a single riff on the entire album that had me thinking 'cool', and wanting to spin it again immediately. The overall effect of Monolith of Madness in the background, while I'm reading through or playing my many Lovecraftian board games or role playing games, is not terribly worthy of its subject matter, because it's just never creepy or haunting, atmospheric or lingering, but Rogga has long directed this brand at a very straight shooting, 'fun' take on the horror genre which does effectively breed some nostalgia. Taken as it is, I think it's yet another solid effort in a long string of solid efforts that perhaps focus too much on being 'solid' and nothing more than that, and I wouldn't mind a higher ratio of ambition > frequency of musical output, but that doesn't completely detract from the moderate level of abusive darkness you're getting from this. Admittedly, my enjoyment of Revolting peaked with the first two albums, Dreadful Pleasures and The Terror Threshold, but this one won't disappoint much if you're looking for another In Grisly Rapture or Visages of the Unspeakable.