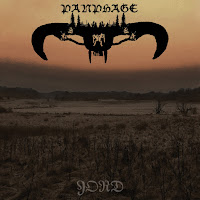 Sweden has had a glut of rustic, pagan black metal bands over the last few years, a lot of which approach the aesthetic from varying musical perspectives. Nordvis has been a label representing many of the notable entries into this particular field, and Panphage is no exception to that, having generated a good deal of buzz among the crowd that favors the themes he explores. Despite a long history of demo recordings, Fjällbrandt only started producing 'official' full length albums a couple years back, with the debut Storm and its successor Drengskapr only recently put in circulation; and Jord arrives as a someone bittersweet swan song, since I've already seen mention that this project has been put to rest. But if rest it must, at least it's creator has left it on a high note, because this disc soars above its predecessors, perhaps not attaining the next level of the Earth's atmosphere, but providing a broad and convincing introduction and/or retrospective to the sounds Panphage was gleaned on.

Jord shifts between two climes; the first being a highly melodic, majestic brand of black metal driven by programmed blasting, which can be traced to a lot of the band's Swedish peers of the past, only with less cooks in the kitchen. Another comparison I'd draw is Quebec's Forteresse, only with less organic percussion, less repetition and monotony, and a lot more breadth to its glorious guitar lines. The second shines through in the more simplified, churning lower chord-driven cuts like "Som man sår får man skörda" which have a more overt, late 80s Bathory vibe to them, and even a bit of a primal punk nature. I'd say these two halves are evenly balanced throughout this track list, and thankfully blend together well due to the omnipresence of the harsh, barked vocals which hit a great level of resonance and reverb as they rave over the chord constructions. These aren't isolated here, because there is also a droning clean or chanted vocal provided in places, or even some angelic, higher pitched cleans in one of the best tracks ("Skadinawjo"), but Fjällbrandt always sounds engaging and genuine no matter what timbre he's taking, and it helps balance out the more methodic impression left by the drumming and allows Jord to hurdle its own flaws nicely...

Perhaps the largest of which is the abrupt way some of the tunes seem to fade out. Not exactly some jarring dealbreaker for the album as a whole, but it had me wondering if there were some flaw with the promo version I was listening to. Otherwise, there's not a lot bad I can say about this album... perhaps it's not stuffed with the most unique riffing, but the patterns are almost always good enough to create a symbiosis with the listener, and escape over shining pastures towards a waning dawn. I like how the beautiful guitars are still coated with a layer of rawness and grime, and how the overall atmosphere of this disc truly feels like you're experiencing it outdoors where only the sky can contain its magnificence. The riff progressions also create emotions of melancholy and desperation, the folksy segues tearing atavistic portals in the atmosphere with the best of 'em. Even if at first Jord seems samey with a lot of other albums of its ilk, I can without hesitation guarantee that there are particular moments where the listener will be moved by its convictions, especially if you're a heavy advocate for the earlier 90s black metal attempts to blend these similar aesthetics of harshness and centuries-old majesty. There are some GREAT riffs throughout. Not a flawless sendoff for Panphage, if indeed that is its fate, but unquestionably a formidable one.