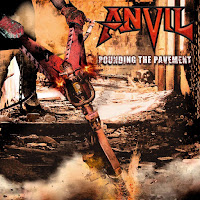 Anvil has honestly put together a pretty decent run since the release of their documentary, with This is Thirteen and Juggernaut of Justice being arguably their best albums since the 80s, and Anvil is Anvil a few years ago also ably delivering the goods. However, I can't say that it's been a consistent effort, with the sagging Hope in Hell in 2013 and now, unfortunately, their 17th full-length, which as its cover implies, is hammering away at the pavement, but not dredging up much of any interest. That's not to say Pounding is a total wash, but it takes far too long to start getting anywhere, relies a little more on goofy and highly diverse lyrical subjects, and musically plays it too bloody safe, with a smattering of been there, done that riffs which catalog not only their own past but hard rock/metal in general.

Between the lumbering, mastodon metal attempts to produce a new "Metal on Metal" or "Forged in Fire", the more bluesy, party-rock anthems, or the energetically sincere but barebacked poundings that actually reach some level of engagement, this material just doesn't inspire. I'll admit, I laughed my arse off that the opener "Bitch in the Box" was a tribute to a GPS, but even there the music left so much to be desired; run of the mill, predictable riffing patterns, functional melodies or leads that are simply clones of so many you've heard before. They do shoot for a number of those slower, grooving and mighty heavy metal epics and almost always come up short of anything compelling, and often when tackling the more interesting subjects here ("Nanook of the North") the narrative structure of the vocals can come off a little tackier than intended. Sure, I actually do admire Anvil's dedication to taking on uncommon themes, whether silly or serious, but so often the execution just isn't there to match the inspiration. While they've always been a very traditional band in terms of construction of their rhythm guitars, there was usually some darker mood or twist, some epic chorus, or some cool lead to lend a little nuance or distinction.

Not so much here, as tracks like "Doing What I Want" feature such by-the-numbers structure, bland verse and chorus lines that are not worthy of one of Canada's most unique metal frontmen. The last chunk of album, starting with the relentless "Black Smoke", measured "World of Tomorrow" and frantic, bluesy "Warming Up", was actually passable stuff, I found my neck starting to twitch, but that's all about 30 minutes into the album, and even that material is fairly generic, it just seems a little more natural and the product of sharper decisions. The production of Pounding the Pavement is clearly not a flaw, not that I'd mind if the band recorded dirtier, but the rhythm guitars have a nice cut to them, the bass lines sound perfect in the mix, Robb's drumming is fired up as usual, and the vocals and leads are also very well balanced. But this is just not a selection of tunes I think you'll hear much in their live rotation, or at least not for very long since they just don't live up to the classics this band has penned in the past, even the recent past. Juggernaut of Justice is, for instance, a far better album and there's just no point at which I'd ever listen to this over that. A little more solid than Hope in Hell, but pretty unflattering overall.