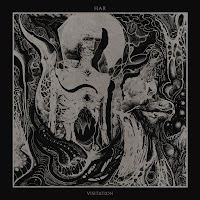 Some of the most vile and troubling extremity I've heard out of Israel since a Sonne Adam, Kever or Tsorer, it doesn't surprise me that Har's members have some shared history with those projects, channeling a morass of black, death, and even a fraction of doom metal fundamentals into an admixture of frightening magnificence. Roiling tremolo riffs bleed forth from a turbulent background which is as much created via sustained, airy growls and rasps as it is by the belligerent and heavily resonant runs across the percussion kit. Often the chord patterns lapse into familiar configurations, but quickly enough shift gears before they can garner enough of a redundant feel to score marks against the material as a whole.

I find the group is actually best when its on full frenzy, vocals elevated into a panoply of nihilistic specters that cruise over the guitars, especially as it contrasts into a doomier element like the waning moments of "From the Blood of a Whirling Dagger", which itself cedes into sparse strikes of atonal droning against the necromantic chill of nothing. The ambient components are in general very well done, like the ethereal crescendo of Cyclopean harmonies that heralds "A Shadow Henosis", but they balance this off with an addicting enough blackened barrage that even on such a short-player they scale and descend through a number of aural valleys that are consistently oblique and threatening. Visitation succeeds in fomenting unrest, although not every riffing progression is interesting, they are all flush with its aesthetic darkness and should please underbelly dwellers of the filthier, atmospheric climes that inhabit the rosters of labels like Dark Descent, Iron Bonehead and Har's native Blood Harvest.