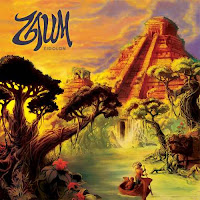 The Great White North's premiere meditation metal gurus have returned with another swollen foray into the depths of space and time. Two men, two songs, over 20 minutes a piece, which puts them at an even more substantial length than their forebears on the duo's 2014 debut Oracles. Normally I don't go out for this sort of thing, because it's often a lazy excuse for filling time with what I am supposed to believe is 'heavy' or 'crushing' or 'desolate' but in actuality is just tremendously boring...and yet Zaum are one of those bands fully capable of pulling it all off and transporting their audience to the myth-historical sojourns rambling around in their own gray matter. That they do so with such consistency shows a foresight into the direction they want to end up, rather than just sloppily biting off more they can chew and eschewing compositional skill for the sake of reckless wanderlust, and as a result, there is more genuine wanderlust here than you'd expect.

The two tracks are not entirely different, but do focus slightly harder on disparate elements to their overall aesthetic. "Influence of the Magi" transforms from a landscape of open, brooding tone-space to a marriage of deep chanting and funereal stoner doom, driven by a distorted bass and resilient synth pads like organs. The bass-line notes drudge along with the confidence of the Hyborian Age, the vocal lines arching with majesty behind the grimier, lead vocal style which feels like a doped up, harmonized North American answer to Tom G. Warrior's earlier 'cleans' from Into the Pandemonium. Percussion takes a dingy back-seat to the amazing richness of the bass tone, but it all plays into the panoply of the atmosphere like the named Magi wandering across broad expanses of sand and dust on their pilgrimage to a holy site. Like the best of the drawn-out, psychedelic doomsters, Zaum offers just enough nuance and variation that I never get quite bored, and even at their most repetitive there is simply a transcendental quality which can hook me for minutes on end. I always feel like I am going where they are showing a path, a trail of breadcrumbs to an ancient world the History books revealed to me, or I might have paid a lot more attention and gotten a few better grades...

While "The Enlightenment" does share the formula of opening with an almost cinematic, natural backdrop, it's central riffing has an even more Eastern feel to it, like monks of doom tramping through the streets of some exotic bazaar with an Elephant demi-god riding on their palanquin, a harsh gaze of judgement sweeping the immoral street-dwellers. This is Zaum's most triumphant tune to date. The percussion drops in and out for the other instrumentation, synths and strings and atmospheric feedback that could probably charm a snake out of its basket from a boombox speaker. The ritualistic lyrics kill it, and the vocals here get pretty tortured beneath the volume of that...just AWESOME bass...some of the best bas...

Look, the band is just fucking great. I want twenty more albums minimum, each honing in on different elements, or mythologies, or beasts, or Ages. Aeons. Hallucinogens. Get their stuff.