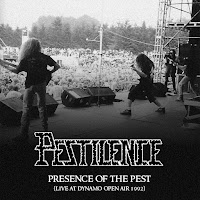 As the 'second winds' of classic 80s and 90s era death metal bands begin to blow out, or even if they don't, or they transform into 'third winds', I think it's only inevitable that we're going to see a lot more posthumous, throwback live LPs, demo or rehearsal collections that sell largely upon the nostalgia of their long time fans, or the historical cravings of newer listeners with a lot of disposable income or hard drive space. Presence of the Pest is one such example, releasing nearly a quarter century after the height of the band's powers, recorded in their home territory at the Dynamo Open Air, after what many would regard as their best or at least most popular album, Testimony of the Ancients.

Now, I do not count myself among that crowd, since their first two albums are a one-two punch combo that has not been surpassed for me over decades of death metal, but it stands to reason that this is the material most of their fan base most strongly identify with and thus it's a solid choice if you wanna reap a little scratch. The set here is, thankfully, second and third records pretty evenly, packed with gems, many of which are among my favorites, and sound quite energized back in this time when the band had some obvious enthusiasm. Granted, a live album from the years Martin van Drunen was fronting the band would have been the ideal for me to drain the wallet, but the infamous Patrick Mameli's vocals here are brute and ugly as on the recordings, and he doesn't really take a torch to the older cuts. Having seen them live Stateside on the tour for Testimony, I can recall that this was about the level at which they were performing, only here you get a lot more material since they weren't opening up for a larger act in a compact set, but given some actual time.

As for the live mix, it sounds pretty good in the mid-range, and conveys a lot of the grisliness of the songwriting, especially the Consuming Impulse material; but the riffing can occasionally come across as confusing when compared to the original studio versions. Guitars carve out the foremost point of production, while the bass is audible enough to make out through them, the vocals ride just outside and to the top at critical moments, and the drums also pop through. Leads sound just as spurious and infected as you'd want, and they play across all the albums with consistency. This is ESPECIALLY great to hear on "Chemo Therapy" which sticks out as a sore thumb as the sole representative of Mallevs Maleficarvm. And that's a bit of a downer, but it makes some sense that they mostly included Testimony of the Ancients due to its freshness, and Mameli's comfort growling and performing it. I might not hold that album in such high esteem as its predecessors, but I do enjoy it quite a lot and can't scoff at hearing "Presence of the Dead", "Twisted Truth" and so forth.

Admittedly, I'm not the hugest proponent for live albums. There are several in my collection that I have found timeless and alluring to keep around, but I'm always more apt to listen to the material in its studio context, and Presence of the Pest is no exception. It's a solid offering that wont' let you down if you pine for the Dutchmen at the pinnacle of their penetration into the 90s death metal market, before stuttering with the experimental (if still cool) Spheres. But as much as I love the band's early full-lengths, an admiration I will take to my own grave, I feel that I could very much live without this. And so I will.