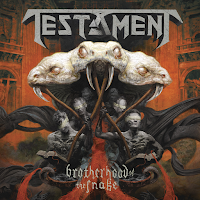 I've been scratching my head trying to think of why an album with such obvious effort attached to it as Brotherhood of the Snake does so little for me. I'm afraid it all boils down to the fact that without Chuck's vocal presence, and a few uniquely Alex Skolnick guitar passages, this could be just about any 80s-borne band putting out material that they suspect as 'modern' and 'relevant' but is in fact direly predictable and indistinct. That's not to say Testament have themselves a disaster here, but I'm experiencing a lot of the same problems I've had with 21st century efforts by bands like Onslaught or Exodus, which seem so marred by a bland, post-Pantera groove metal influence incorporated into the riffing patterns that any real nostalgia the newer material might evoke and launch renewed into the present is quickly sifted away.

Production here is loud, vivid, pounding, and polished, and the songwriting itself is certainly sprung from the DNA of past records like The New Order, Practice What You Preach and their last disc Dark Roots of Earth, but there's just too little of interest in how the riffing sequences manifest themselves other than as mediocre anchors for Chuck's performance, which is, admittedly one of the few aspects of the album I'd consider a highlight. It's one thing to dabble in familiarity, a technique that worked well for me with 2008's The Formation of Damnation, but throughout most of the track list here you are treated to a few callbacks to their great 80s works that do nothing to elevate or extend their legacy (sorry, ha) to anything even rivaling what has come before. Breakneck headbanging, brickwork Gene Hoglan drumming and overall high proficiency paychecks earned all around the lineup do nothing to alleviate the disappointment that there is nothing here I'm really going to keep repeating in my brain for any length of time beyond when I'm actually hearing it through a speaker.

Certain tunes like "The Pale King" and "Stronghold" have rhythm guitars in there which are just about cut and from past songs and then pasted into compositions that are far less interesting beyond just the sheer level of energy the band is willing to commit to them. And the aggression level is not in question here. If you're a new thrash fan picking up your first few CDs, with little info or experience with this Bay Area quintet's discography, you might be bowled over that these veterans still hit the boards this hard. But it's not the first time I've felt so underwhelmed...there was the album Demonic which had a brutal, groovy title track and then little else to offer it became so mundane, or The Gathering, which had a fairly strong reaction, but ultimately felt to me like they were doing the rounds, only more heavy for the death metal audience contemporary to its release. This one suffers a lot of the same symptoms, and while they were certainly present on Dark Roots of Earth, that album benefited from a few fresher ideas and more impressive foundations for the songs.

This is not all a bust, and the latter half of the album has tracks like "Neptune's Spear" which are still engaging and have some picking patterns we haven't heard within the Peterson/Skolnick realm, but for every spark like that, you get a dull counterweight like the insipid opening of "Centuries of Suffering" which has one of the most boring note progressions I've heard in their career. Those are the moments where Hoglan's powering beats and fills, and Chuck's hoarse growls carry everything. The last four tracks are clearly superior to everything that came before them, but even then there is just not enough charisma there to really save it. The leads, while solid, don't really offer any sort of emotional elevation to the pieces as they should. Superficially, Brotherhood of the Snake has the volume, forcefulness and finesse to satisfy some army of Jango Fett-like assembly line thrash fanatics, and maybe some of the old school crowd will just be thrilled that they can dish out such a beating so deep into their years, but I was left wanting less of a checklist of technical qualities, and more of an affirmation of why Testament helped vanguard that second tier of 80s thrash so hard.

Verdict: Indifference [6.75/10] (the thrashing and bashing and blistering burns)