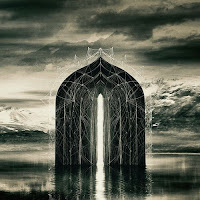 V.I.T.R.I.O.L is a beautiful looking CD package, a trait I'm starting to associate with Les Acteurs de 'Ombre recordings on the whole, this one through its sub-label Emanations. Upon reading this French duo's genre, I was expecting some black metal of an atmospheric inclination, and that is precisely what is showcased throughout five substantial tracks of about 8-11 minutes in length each. However, Pénitence Onirique does not achieves its goal through techniques one might expect...this is not a work of endless ambient passages ceding and receding from the predicted grimness of its medium, but rather a straightforward barrage of black metal given a gleam by the very resonance of its guitar chords and melodies.

Yes, with the exception of the slogging bass line and open picking that christen the title track, and an occasional atmospheric cutaway (like the one in the midst of "Le Sel"), this is roughly 50 minutes of pure black metal force channeled through the shining imagery it evokes upon its external appearance. Floods of chords and and tremolo picked melodies cascade and crescendo about the ceaseless thundering of the beats, and the album relies heavily on repetitious sequences to transport its listener off to the landscapes within the band's own inner vision. The pacing will occasionally subside to a wall of simple, heavy chords above which some airy, almost folksy notes are painted like clouds (also in the belly of "Le Sel"), but this is not necessarily a band out to oust convention from their creative process, rather than hone it onto a particular element of stay consistent to that for vast gulfs of time. The vocals are a standard, often sustained black rasp in French, that gets lost in the streams of notes but also helps to give it a grimier, more fulfilling effect as the shadows of corruption seek to crumble the listener from his/her exposure to higher-pitched, light-touched tones.

I struggled a little with my overall reaction to V.I.T.R.I.O.L because it's an album I find successful at finding and sticking to its chosen soundscape, just one I didn't really enjoy. The devil is in the details, and for me there just weren't enough enduring, memorable riffs fueling the experience. There are certainly a handful of highlights, but even with repeated listens there wasn't a lot of aural subtext which emerged from the constant momentum it thrives upon. It occasionally bordered on those mesmeric patterns it seems to promise, but I almost feel that a little more dynamic range and variety would have done the record a world of good...because when that occurs, it does. However, when you're in the right head space for an album that feels like you're staring at sunlight reflected off an icy, glacial mass that extends as far as one can see...OR, if you're in the market for that strain of repetitive, melodic black metal that a lot of French-Canadian acts like Forteresse seem to have mastered, then Pénitence Onirique is a solid starter with potential.