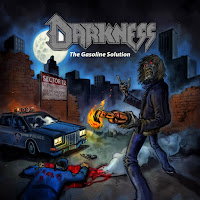 Further narrowing the thin band of signed 80s thrash bands that have yet to put together a reunion, Germans Darkness gathered themselves up from the dust several years ago to get in touch with their inner, disheveled youths and put together an EP with some old and new material. The Gasoline Solution is a natural followup and affirmation of this renewed vigor, a surprisingly solid slab of speed and Teutonic thrash, tempered with the appropriate riff references to legends from Destruction and Tankard to US legends Slayer. The cover definitely makes this look like any old pizza thrashing, only they've got a right to do so, since the Molotov-wielding undead hesher mascot is a throwback to the one on their minor cult classic debut Death Squad and its lackluster successor Defenders of Justice.

This is all about the rich, riffing rhythm tone which is a direct callback to those German records of antiquity, slightly cleaner for the current generation but lacking none of the punch you'd require. In fact, I'd say it was the singular best sounding record of their career, even if Death Squad might be the go-to for nostalgia's sake. Lethal speed which draws comparisons to records like Terrible Certainty, Extreme Aggression, Chemical Invasion, Eternal Devastation, and even a little "Black Magic" in several of the songs. They can bust into a slower, neck-beating passage here or there, where the thundering toms perform a coup on the snapping, steady thrash beats, but there is no neutering of the momentum anywhere to be found, and the guitars are really exciting with the caveat that on about 50% of the riffs you know where the riff is headed before it even hits a second measure. But the other half of the time, I felt like I was 14 again and salivating over the latest cassette from this scene I could plant into my Walkman. Leads are fast and do not waste your time, though they do sound a little wimpier in the mix than the rhythms supporting them.

The band has a new vocalist named Lee, but I don't think he'll take much getting used to since his splattering tone is a great fit for the material, recalling Atrophy's Brian Zimmerman, only with some hoarser growls thrown in there. They also 'harmonize' some of his lines with an impish backing vocal or shouts that really add another level of street violence, like you're being pursued through the dank alleys of some 80s dystopia by dudes that look like the mascot. Lyrically, they cover the usual social or political subject matter which is more or less relevant to this date, while having a little fun in a tune like "Tinkerbell Must Die". Okay, that was apt to evoke more belly laughs 30 years ago, but it's just another little detail on how Darkness are committed to sticking with the schematics that first launched them during that period, and while The Gasoline Solution is by no means an ambitious or forward thinking effort, the two long-time members of this band can avert whatever midlife crisis might have been haunting them, since this is just as fun as Death Squad.