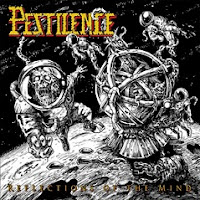 I have little idea if there will be life post-Obsideo for Pestilence; one day it seems to be one story, and then a few months later there 'that's all she wrote'. But for Vic Records, this posthumous state continues with a slew of fan-targeted releases. First, The Dysentery Penance which gave you a chance to own the band's earlier demos where they were transitioning from their thrash metal foundation into. And now, Reflections of the Mind, a record that consists of demos and rehearsals from the second half of their Roadrunner signing, Testimony of the Ancients and Spheres. I'm not quite sure who it was that demanded the release of such a thing...perhaps it was Mameli, perhaps there really is some fan outcry for it that I'm blissfully unaware of, but the fact that it's re-mastered by Dan Swanö piqued my interest enough to dive into it and see what's become of these tunes...

And it's not awful, merely unnecessary. What you're getting here is a mash-up of a rawer form of Testimony of the Ancients and a Spheres that sounds somewhat more brash but coherent, mainly in how the death/thrashing riffs offset the experimental guitar effects that were the selling point for that underrated anomaly. Here, the tones and textures in tracks like "Searching the Soul" take on a more purely ambient hue, whether it's because they weren't finalized or 'plugged in' I cannot say. In a few cases, like "Changing Perspectives", it makes the finished product seem like more of a jumbled mess as the rhythm guitars are brought to the fore against the dryer melodies. A few tunes like "Level of Perception" and "Multiple Being" sounds really washed out with all the reverb, and others like "Land of Tears" are very obvious raw rehearsals and sound pretty crappy compared to the final products you heard on the full-length album. A few of the selections are surprises, like a rough take of "Echoes of Death" from Consuming Impulse or a clamorous cut called "Omens of Revelation" which seems to have been sliced up into other songs later.

There is probably a portion of Pestilence's audience, specifically those who scour the internet for or swap death metal demos through the mail, that would be thrilled by this or even develop a preference, not necessarily for the rehearsals which dominate a lot of the play length, but the raw/alternate takes on songs they might not have fully appreciated. I am just not one of them. Had this been a pure alt recording for Spheres, an album with some clear production issues, tweaked by Swanö, then it could have actually been worthwhile for me. But as it stands, the best I can say for it is that Reflections of the Mind might have a few takers, and it's at least better than some faceless Greatest Hits collection which just lifts the songs from the studio albums. This is something slightly different. That said, I do hope this and the Presence of the Pest live recording are the last of this glut of fan packages, and if there's to be more Pestilence it's new. Doctrine and Obsideo were hugely divisive albums, but at least that more mechanical, groove evolution of the band was slightly forward thinking.