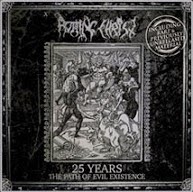 I don't have nearly as many expectations for a pack-in anthology disc as I do for a label-wrought compilation...the former is usually added as a gimmick, and at least you might be getting a half decent rag along with it...the latter is often nothing more than some I's being dotted on a bottom line. Metal Hammer of Greece is arguably one of the more 'legit' versions of that particular rag family still in print, and so it makes a lot of sense that they'd collaborate with countrymen Rotting Christ, the most successful dark metal band of Hellas, to put this forth, but let's call a spade a spade: this is reprinted material spanning the band's career, no matter how you try to dress it up and act like it's something unique, or 'exclusive', or 'chosen by the band itself'. It's not like you're going out and paying $18-20 for a pretty new booklet with a bunch of recycled cuts you've already heard, but it's still not nearly as important as going through this fantastic band's catalog and experiencing these songs in their original environments, along a lot of other great songs...many GREATER...Sakis and company obviously might not have the best taste in their own music, I'm putting that out there.

Do the songs 'represent' each of the group's many stages of evolution appropriately? I would say yes to that, and they're laid out here in a reverse chronological order, with one cut each taken from all the full lengths, beginning with "In Yumen Xibalba" off the disappointing Κατά τον δαίμονα εαυτού and then touring back through their better material up to track #11, "The Sign of Evil Existence" off of Thy Mighty Contract. But it doesn't end there, for the next few tracks ("The Forest of N'Gai", "Feast of the Grand Whore", "Vision of the Dead Lovers" etc) are taken from the band's earlier EPs, they are not exactly hiding those primitive origins and why should they? They close the selection off with another cut from Genesis ("Astral Embodiment") and then a live version of "Athanati Este", which is possibly the only thing the diehard fan hasn't heard (outside the studio), but that's exactly it...and like so many of these collections, I felt myself scratching my beard at the level of missed opportunity. Why not replace most of this with rare or live material, and offer someone an imperative to purchase the magazine? Clearly the only people this is going to possibly sway are complete newcomers who have no history with the Greeks, and even then I'm not sure they selected the best tracks for that job.

As for someone like myself, who has been following the group forever and enjoys the overwhelming majority of their full-length recordings, I can't think of a better use for this than smelting. Maybe I could eke out a brief few seconds of kindling from the cover art, though to be fair it's far superior to their last album which is one of the most shockingly amateur examples of 'minimalism' I've seen from a professional band that should know a lot better. If somehow, you are a Greek metal fan buying Greek Metal Hammer and you've missed out on Rotting Christ, then congratulations on this amazing find. I hope it gives you 70 minutes of enjoyment only before you head out and buy some of the band's actual albums, but as a 'product' this has all the substance of the aether. Inhaled it, exhaled it, got on with my miserable life. If I wore makeup I might use this as a mirror, but as it stands this won't even function as a rewritable CD. Hope there are some good articles in there... Perhaps there aren't a flock of ravenous label shills laughing behind the scenes, their fangs glistening as they drink the vitae from your wallets, but it's unfortunately just as much smoke blown out the proverbial ass. I'd rather marathon Κατά τον δαίμονα εαυτού while being served as kibble to Cerberus' spawn than take another look at this.