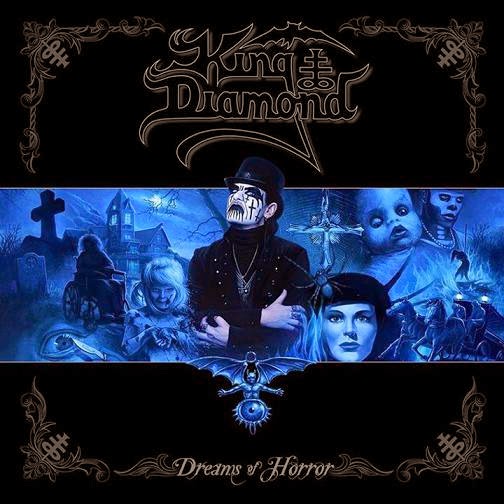 Should a release like Dreams of Horror really even exist in 2014? King Diamond and Mercyful Fate might stand beyond criticism in the eyes of many fans due to their respective legacies and longevity, but in the age of Bandcamp, YouTube, Torrents, etc. when most people can't even be bothered to purchase new original music, how will a compilation of previously recorded material fare? The fact that the tunes here are 'handpicked' by King Diamond doesn't really matter for me, that's been done a hundred times by various bands/musicians and any claims to the contrary are hyperbole. 'This is the first time a band has EVER cared enough achieve this monumental accomplishment!' Get stuffed. The fact that they are considered the 'ultimate versions' of these songs is also irrelevant. No, my friend...my friends, the 'ultimate versions' of these songs are the ones that the fanbase experienced as they were being recorded and released since the 80s, that stuck with us and entertained us for decades. Or, really, fans of ANY age who first took an interest in and tracked down the first legendary five records, which still stand head and fucking shoulders above anything this musician has released in his solo act since 1990.

Now, there is some novelty here in that they've managed to score the licenses to include the old material from Roadrunner/Warner. So while there have been comps before, this one is the most 'complete'. Yet it really just seems that KD and Metal Blade have gone out of their way to snake-oil this collection as the 'studio versions of a live set', as if that is supposed to render some legitimacy to purchasing more music we already own and take the individual tracks out of their respective stories. How about if we want to experience a live KD set, we just go to a goddamn live set? In reality, while the mastering on these tunes might sound crystal clear and evenly distributed across various eras of the band, it's just another pocket picking with a collage of prior album covers, high production values on the package, the same old same old from a major metal label which is just not going to dupe anyone except 'gotta catch 'em all' collectors or the who might mistake it for a new collection. So it's your basic set up of several songs taken from each of their studio albums, the career retrospective anthology, with the first disc consisting of their career hot streak from Fatal Portrait (1986) to The Eye (1990), and then the vast majority of the second disc, with a few exceptions from The Spider's Lullabye and a handful more, being almost entirely avoidable. I mean, there are tracks from the horrendous The Graveyard on this thing, which no amount of studio wizardry can transform into quality music, so I find it nigh impossible to consider this the ultimate representation of the King Diamond catalog.

Any and all points I give here will be for the work put in remastering the songs, which retain a lot of their original crystalline clarity, in particular King's falsetto lines and the elegant, wistful leads that characterized the better half of their discography. Clearly they took some time doing this, and were intent not to just reproduce the material 100% off the older printings. I'm not entirely opposed to re-recordings of stuff with modern, evolved sounds just for fun (like a few German thrash legends have done successfully), but this is not one of those cases. That said, I still do not find these to be superior to experiencing the songs in their original format, in among their neighbors which helped relay the narrative of each of King's horror sagas. Sure, you can have favorite KD tunes and put together a playlist for yourself, but removing "The Family Ghost" and "Black Horseman" just isn't going to cut it for me when I want to immerse myself in Abigail. If it's a live show, and they want to pick and choose for the set, that's fine, but I just don't need to plunk down the dough on something which doesn't feel authentic. I'm not sure if this was some sort of contractual thing with the label, but I wish any effort expended towards this had simply been put into new material, because it's been well over a decade since they were turning out material I actually enjoyed (Abigail II, The Puppet Master) and I know on some of that I'm probably even in the minority.

Really cannot recommend this whatsoever unless you absolutely must own every single item with the logo on it, to the extent that you're like a KISS collector maniac, only for one of the other face painted rock stars. Or maybe if you're an audiophile who loathes some of the original recordings, but then you'll be left hanging since there are only snippets of the total backlog included. Granted, there's a little more here value than in your average, soulless big label anthology, in that someone or several persons sat on their duffs and tweaked a few knobs. So I doubt I'll slap a massive zero on it, but as such a huge fan of all that unforgettable music Petersen and LaRocque released through the 80s and earlier 90s, I can only implore the new listener to experience their legacy within the proper perspective. The proper context. You want to support the band? Start at Fatal Portrait. BUY Fatal Portrait. And then the next, and the next. Go to a show. If you can't, try and check out a video of a gig (I don't believe there are many official DVDs you can choose from). I can't wait to hear a new album personally, and I do hope it's a triumph, the best thing they've done in 25 years (specially after King's triple-bypass surgery). But this just isn't going to tide me over, and I find it pretty useless since there is just no chance I'll listen to this over the albums. And if I want a playlist for driving, I can always just press 'Shuffle' on the first six.