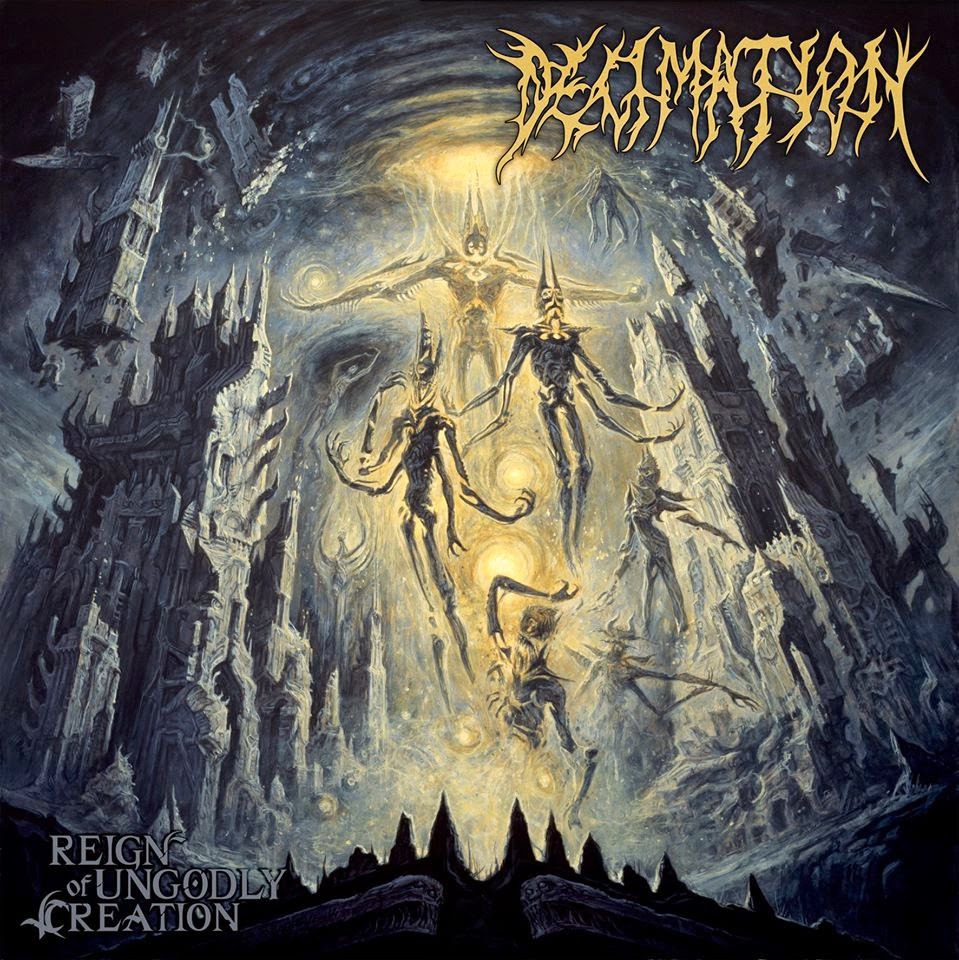 It's a slick touch to kick off the third Decimation full-length with that mono sequence, because when the stereo brutality arrives, you are likely to experience the most fulfilling moment of the entire album. Not because the rest of it is bad, by any means, but on the whole, Reign of Ungodly Creation very rapidly escalates (or, if you're not into tech/brutal death metal, deteriorates) into one of those records which feels like so much focus is put into its aural presentation as a series of workouts or exercises, rather than a bastion of effective songwriting. Like so many albums of its niche, it is content merely to beat on you relentlessly, but without leaving much of a bruise beneath the surface of the listener's emotions. It will mug you on the street, steal your wallet and bus pass, sure...but not keep you up at night haunted by what you've just heard...

Partially this is due to the large amount of derivation gone into this: the taut, violent death thrashing of the faster-than-mid-paced picking progressions is redolent of Cannibal Corpse in a frenzy. The clinical intricacies play out like a hybrid of Suffocation and ancient Pestilence, and you can season the rest with a lot of Morbid Angel and Deicide influence filtered through a Deeds of Flesh lens. None of that renders the album insubstantial, inefficient or unlistenable, because those are usually considered the 'right' inspirations going into an onslaught like this, but it just doesn't seem that Decimation is ever interested in taking them further or elsewhere, and when it comes down to the raw value of riff composition, most of the 37 minutes of material seems more reliant on form and function above poignancy. It's surely abusive on the limbs and joints of the guitarist's hands, and the drummers entire body, but no matter how busy the riffing gets, so few of the note patterns ascend into anything truly compelling, beyond the few segments where they play the more atmospheric and dissonant chords (often at the beginning of the tunes). The bass is peppy and hectic to collude with the rhythm note placements, but I wish it had a little more body to it, because it might help offset how the album sounded like a scalpel being repeatedly stabbed into plastic and not flesh. The vocals are exactly what you think they will be: incessant gutturals, unforgiving, but simultaneously average.

Lyrically, this is highbrow mystical stuff with wordy song titles like "Psalm Carnage in the Ghoulish Chapel of Gehenna" or "Aberrant Ablution by Filthy Excrements of a Grotesque Crassamentum", and this pseudo-pretentiousness makes it a little hard to discern whether or not Decimation takes this seriously at all or if they're just taking the piss on us. It's like a bookworm's alternate reality spin on the first Morbid Angel album. Musically, though, it's all mechanics...the mechanics of brutality, without the flavor or the personality of the hideous imagery and rock-bottom human depravity that inspired such a genre to form in the first place. The Dan Seagrave cover on this thing is fucking stunning, one of the coolest I've seen all year, but again we've got an instance where the artwork inspires us to think of these ominous, cyclopean dimensions of fear and majesty, and the music itself seems far too grounded into the surgical ward which mass produces a lot of bands with the same sound. You want to enter that otherworldly reality depicted there, with alien beings floating around a horizon of imposing castle towers lifted free of their gravitational anchors, but you get nowhere close.

I don't mean to come down too hard on Reign of Ungodly Creation, because it is clearly a kinetic and competent afternoon spent at the death metal gymnastics, but apart from a few moments in songs like "Mystic Transformation in Encrypted Scrolls of a Grievous Sermon" and "Psalm Carnage..." where the dynamics occasionally hint at something far more frightening, I just felt like the album was running cycles in a hamster wheel or performing endless calisthenics and repetitious lifting regimens, and it never really capitalized on what these musicians are obviously capable of if they just took a few more minutes to analyze what made their own inspirations so damn cool. I've enjoyed albums in this wheelhouse before. I mean, there is a place for stuff like this, and it lives up to those crucial brutal and technical expectations that its targets audience needs to check off the list, dotting its i's and crossing it's. Yet a little more experimentation, a slightly altered angle/vector of approach, and in some cases, measured restraint could go a long, long way for a group like Decimation.