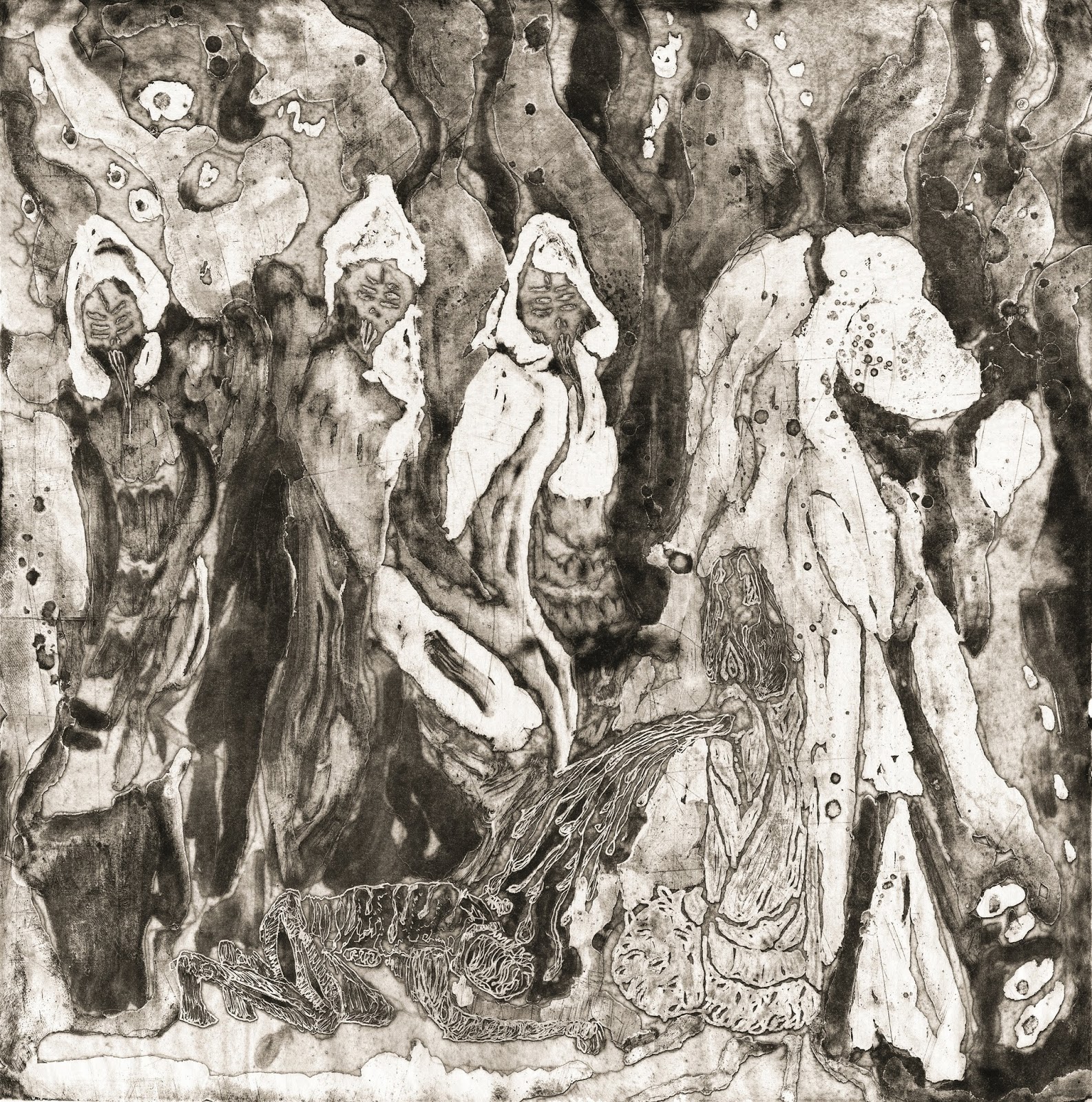 Dire Omen's continued development has metamorphosized them from fairly humble, Floridian-tempered death metal roots to the more chaotic and calamitous death and black extremes in the wheelhouses of their countrymen Antediluvian, Mitochondrion, Aurochs, Adversarial and so forth. In fact, as of their 2012 Severing Soul from Flesh EP, the band had really transformed into another branch of that twisted tree, with some clear connections to its neighbors, like the morbid and esoteric cover artwork by Tim Grieco (aka Hassiophis) of Antediluvian, and that same sense of unhinged unpredictability tempered only by the certainty that you are in for one graven, subterranean onslaught, characterized by the ominous guttural vocals which are suspended just behind the manic instrumentation.

Coincidentally, as the Canadians have matured, so too has the quality of their music, which despite its fits of frenzied abhorrence is still highly riff-focused, with blocky palm-muted rhythm guitars used to break up the blasting, frothy tremolo picked patterns. At the heart of it, this is still very much rooted in the Morbid Angel, Deicide and Incantation styles of the earlier 90s, with reference points in Blessed Are the Sick or Onward to Golgotha, but where those bands sounded at the time like men who had caught a glimpse through some tear in the space/time continuum to a Lovecraftian void of horrors, these Canadian groups seem to treat the aesthetic as if its their home terrain. The listener really feels like he/she is being transported through some claustrophobic corridor of filthy flesh, pressing in everywhere until asphyxiated by the ugliness. Kinetic entropy. Sporadic tempo changes erupting in the pure chaos of Limbo, untold anatomies reproducing at alarming rates into squamous anomalies that leech and suck and devour. This is not pretty music, and when the guitars are blitzing along to the very raw, organic drums during blast parts it will grind your fucking socks off.

I'm not going to claim that Dire Omen have really yet grasped the art of brilliant, memorable riff construction, but there is no question that the progressions here are kept very busy, with churning dissonant fills between the unclean beatings that the more obvious chord choices produce. You can't really get bored or exhausted because its too effective at stirring your gut in an uncomfortable way. The bass lines are corpulent, like swollen corpses, and Rolando Rodas' vocals are used more as a 'filler' between the gaps of the notes and percussion, a looming threat that seems to promise that even if you can survive the brawling guitars, there is still this impregnable wall of dead flesh trapping you forever, which really lends some credence to the title of the album. Unhappy, unhealthy stuff here, an unholy, raw conglomeration of their cavernous peers and influences with faint traces of that forgotten, ogrish riff-salad reminiscent of old, old Kataklysm, Disharmonic Orchestra, Convulse, and other bands you might have experienced in the 90s. Madness. Still room for this band to 'flower' into an even more unwholesome, suffocating entity, but this is their strongest material yet.