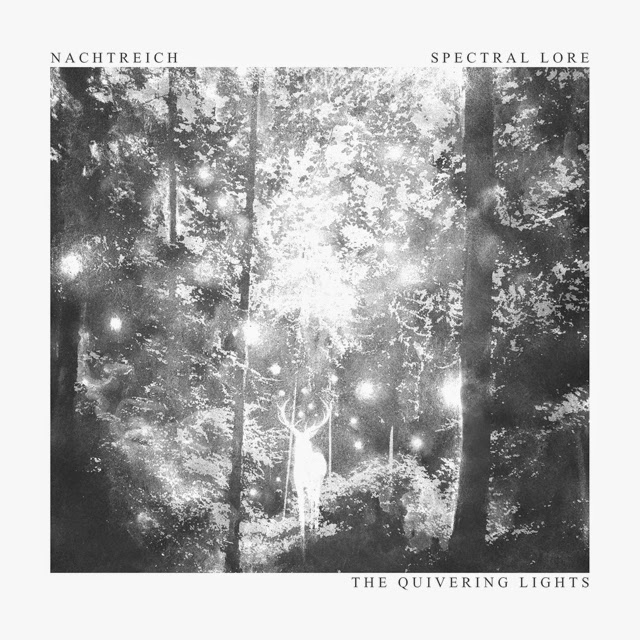 Usually you have me at 'Spectral Lore', but The Quivering Lights split has done the favor of also introducing me to another talented act, Germany's neoclassical black metal mash-up Nachtreich, who have produced a few full-lengths in the past that for some reason I have not previously experienced. Probably because there is an almost labyrinthine number of Nacht- (night-) bands and I get too easily lost amongst them, but after hearing the material here I'll have no problem retaining the duo's sound in my memory. Their eloquent melancholy manifests early on the piano/violin duet of the intro piece "Lights", which later erupts with a few distorted chords to hint at the forthcoming study in contrasts that will define this collaboration in full, but I should add that theirs is a heavy emphasis on the classical instrumentation, with the metallic pieces serving as an emotional discharge or even a diversion.

This also leads to a slight snag in the recording, since the violin and pianos seem so clear and bright as they wander their own course, but when the more primitive black metal rasps and chords come in they seem a little more muddled. That's not to say it was a deal breaker, because really Nachtreich is using the added texture of the electric guitar and vocal as an icing to what they're already best at. The music definitely takes on a theatrical climax, like you're watching some foreign film with a classical score and it just begins to swell, only here in a more misanthropic direction. The composition is not necessarily 'minimalistic', but they use quite simplistic chord motifs to forward that choking sadness, which is hard not to feel moved by even if you're already feeling a sense of familiarity to the notes on exhibit; almost like a Kronos Quartet threaded with tints of raw black circa Burzum, I feel that the Germans might find an audience with fans of stuff like the recent Quebecois recordings by Gris or Sombre Forets, though the music is a little less sweeping and more grounded. They have three pieces on this split, and I have to say the pure, atmospheric instrumental "Greyness" was my choice.

What's even more interesting about this release, though, is how once again Spectral Lore rises to 'meet' the partner on their level, providing most of the more metallic components of the 46 minutes, but also interlacing these with the pianos and such that Nachtreich excels in. Ayloss is no stranger to incorporating all manner of ambient and classics influences and instruments on his records like III and Sentinel, but here he does so in a way that complements the other act's compositional choices. You will certainly encounter his penchant for blissful, interesting tremolo picked melodies and then that sheen of ambiance and vocal variation that he continues to hone, but he too errs on the side of 'raw' when it comes to how the rhythm guitar chords are balanced against the other instruments. All three of his tracks are really on point here, but "Vanishing" was my pick of the three, and 11 and a half minute beast with eerie acoustic/ambient guitars and strings that gradually evolves into this airy monument to drifting black metal with speech-like vocals being barked off in the background, and then a flux between these sorts of elements and the great clean guitars. His final piece "Reflection" is more New Age ambient classical guitar than anything, but it's as worthy a closer as Nachtreich's barren, absorbing intro.

The Quivering Lights could hardly be considered 'colorful' in its stylistic choices...much like the black & white toned cover art it gives me the impression of some nature-inspired sort of chamber music in which the corners are haunted by wraiths and shadows. Though I'm not sure which leaves a more gloomy impression, the black metal edge or the pianos and strings... At any rate, this is 100% mood music, and it might not be a mood I'm as often called to as I was on Sol, Spectral Lore's split with Mare Cognitum, but nevertheless both of the acts really commit, and intermingle seamlessly without eschewing their individual identities. And that, my friends, is far more effort you'll hear in a split recording than so many 'you take this side, I'll take that' recordings that feel like meaningless advertisements more than collaborations that breathe organic life into their creation.