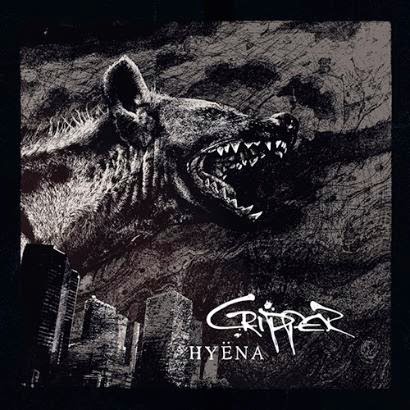 Cripper has always been a decent modern German thrash band that just hasn't taken it to that next level of songwriting prowess, and I believe their fourth full-length sums up exactly why: despite the wide arsenal of weaponry at their disposal, they just cannot write songs at the level of their 80s forebears, and all too quickly when I hear one of their albums, it just fades away from memory. One might bill them as the 'new Holy Moses', since both bands feature an aggressive female vocalist, but alas these guys don't have a bonafide classic behind them like a Finished With the Dogs, something that came to mind after reading the canine title and seeing the cover artwork for this. But while Britta's a competent barker and growler, she just doesn't possess that same viciousness that felt so carnal and in your face back when Sabine Classen was in her prime. And as for the rest of the music here...rather a step down from the last, 2012 effort Antagonist, which was and remains their best, though the first two albums are also solid.

Let me try and sum this up: the reason Cripper just can't hit the mark of bands like Kreator, Sodom, Destruction and Tankard is because there is an ever-pervasive stench of 90s groove metal influence which infects what is an otherwise tightly-knit, true thrashing experience. They write punchy and well produced rhythm guitars, but too often devolve into some bland chugging progression which owes itself to a whole lot of bad American and German post-thrash which was never even in the same league as the Teutonic masters. That hasn't really stopped the band from doing a decent job on the prior releases, because there was just that much momentum and pent up aggression, and they were kind of filling an empty niche in a scene that relied, and still relies far too heavily on its older bands, with so few treading appropriately in their footsteps. I hadn't really minded the more contemporary flourishes to the music, like the super clean mix of the guitars and drums, and Britta's controlled savagery, because I feel like those things are to be expected in the 21st century, and as long as the guitars, leads, and general level of hostility remain consistent, I just won't write off a record. But perhaps it's gone on a little long now without a real success of a record, because Hyëna went straight in one ear and out the other...

The band has always been sort of sociopolitical with their lyrics because, hey, relevance, but hearing some of the 'narrative' vocal lines used here seems a little too goofy to take seriously. The vocals in general just seem too clean, like they punch in and out and even though she's got a decent natural growl to her voice, it feels bland and ineffective here more than on prior outings. Guitars are quite mathematical in execution, and occasionally even waltz out a succession of decent charging notes akin to Artillery's style or post-reunion Destruction; or an explosion of almost melodic death metal as in "A Dime for the Establishment". But so many of the guitars seem to be formed or half-formed from a lot of Pantera-like passages (Cowboys From Hell, A Vulgar Display of Power-era) yet without the ability to 'pop' like Abbott's compositions used to. It's got some groove to it, some forward sprinting attack, but so little of the music develops its own personality since there already a million other bands with the same setup and most of them aren't worth hearing to begin with. The drums and bass sound fine, they are not really the focus in Cripper...it's the riffs and vocals that just didn't sink in for me.

To be fair, Cripper has sounded like this almost from the beginning...but it left more of an impact on me with Devil Reveals or Antagonist, the albums I'd most recommend to new listeners who want to hear where they've taken thrash metal. Those just have better choruses and better riffs, and that is what it all comes down to. But that said, people into the more modern, sterile recordings by bands like Onslaught, Exodus and Holy Moses might find this adequate. There's nothing obscenely negative or offensive about Hyëna, it simply feels more formulaic than inspired, everything here has been done better, and I really want them to just shed that comfort zone and go into a more raw and ape-shit direction where the imagination and aggression gel into something I'll remember. There is a reason I am still thinking about "Current of Death" after a quarter-century but can't recall a single chorus on this disc 25 minutes later.