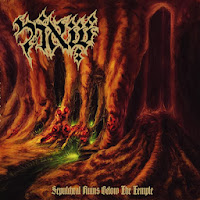 England's שְׁאוֹל (She'ol or 'grave') makes no bones about its crude, subterranean inclinations, championed even by the very title of its Iron Bonehead debut EP Sepulchral Ruins Below the Temple, so it's not immediately out of question to brand this release with the 'cavern core' designation. A fairly popular sound these past 5-10 years, or at least as 'popular' as the death metal underground gets, where a bevy of younger acts embrace the filth and carnage of 90s prototypes like Autopsy, Incantation, and Demilich, and then drown it in cacophonous reverb or other studio techniques that might be a little easier to pull off these years. Essentially, a lot of these projects are 'one upping' the masters in terms of production, but that will depend on the ears of the beholder...I found it fun at first to revisit this aesthetic with such an evil, emphatic sound, but will readily admit that I've grown a little bored of the approach. It's just not the sort that can support endless revisions of the same riffing structures and concepts.

That's not to say She'ol is all that forgettable, or entirely faceless. In fact, the tones they wrench out of their strings and vocal chords are outright loathsome, and they can cultivate an atmosphere with the rest of 'em, but so many of these churning death metal riffing progressions or slower death/doom sequences feel derived to the point that they are lost amidst the scene as a whole. To their credit, baleful melodies are strewn through the EP that help loan a more grandiose sense of the infernal...whether through warped, choir-like synthesis or depressing patterns of notes that immediately lend a better 'rounded outness' to the chords. Sepulchral Ruins Below the Temple is not your roiling, sluggish, Portal-like presentation where the vocals and note changes often hover just at the edge of perception, but the bolder trudge of a congregation of underground monks gathering in a central worship chamber. Riffs vary between faster, trad death metal tremolo bursts and gloomier crawls of chord constructions, so I'm reminded of old Incantation a lot, with the depth dwelling guttural opacity in the vocals that has long been the choice fit for the style, but there aren't more than a handful I could pick out of any lineup of similar minded bands.

Fortunately this is a fairly concise recording, and so rich and troubled in tone that it doesn't necessarily wear out its welcome. Guitars are an uber-saturated mesh of old Autopsy-meets-Sunlight-studio tropes, while the drums are quite tinny to compensate, sometimes to the point that the higher end of the kit seems prevalent over the kicks (though all are audible). Bass guitar is not much of a presence at all, following along with the rhythm guitars and scarcely standing out of its own accord. But whatever its faults, Sepulchral Ruins Below the Temple absolutely lives up to its name (and cover art), and I can't really imagine it being mixed with any other set of priorities. The problem is, once they break into their cover of Darkthrone's seminal "Cromlech" (Soulside Journey), is sort of cripples the original material, because you realize just how much better the note progressions and choices were on an aesthetically comparable tune 23 years ago. She'ol do a decent job of making it sound even more cavernous and resonant. The cover makes 'sense', of course, but it simply makes me pine for that level of songwriting, which the duo has not yet reached even with decades of material to build upon. Thus, this is an EP I could only recommend to those really interested in fleshing out more of this particular niche of extreme metal. It sets that authentic mood of Satan's breath channeled through yawning chasms and geothermal vents, and it's a fraction more dramatic than several other groups pursuing the same ends, but it has simply been done to death.