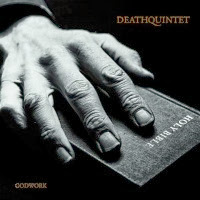 Deathquintet is the official rebranding of a Swedish death metal outfit known as Sargatanas Reign, though from what I can remember of that earlier incarnation the evolution in style is somewhat minimal. Judging by the simple and straightforward aesthetics of the logo and cover artwork, I really had no idea what to expect up front...but Godwork reveals itself to be a pretty standard fusion of 90s melodic death metal interlaced with a lot of groove and some death 'n' roll influences from their countrymen At the Gates, Hypocrisy and Entombed...I even heard a bit of Danish bands like Konkhra and Illdisposed. Sadly, where the Deathquintet proves itself a cadre of old hands at pacing their tunes, and offering a little variety in riff choices, I found the majority of this disc pretty insipid, and the use of various 'name' guest vocalists doesn't really do much to tip the scales in its favor...

The biggest issue here is not one of incompetence nor lack of effort, merely that a lot of the palm muted riff patterns just aren't all that creative, nor the tremolo picked passages, nor the songwriting in general. There is a fairly wide net cast in terms of pacing, so for instance the Gothic-death bass-led verses of "Crawl On Your Feet" and the double-kick anchored melodic charge of "Broken Hands" don't have much in common, yet they all feel pretty predictable in terms of where the notes are headed, and not in a rewarding way. Most of the grooves are all reconfigured from hundreds to come before, and the pretty barebones production of the disc does little to emphasize the compositions as far as atmosphere. Ultimately, while the band doesn't ride any one set of influences to the point that they're a ripoff, they seem more like a general derivative of a group of death metal substyles that have one thing in common: to feel passe, lackluster, never particularly brutal or even as passionate as the formative melodic death metal groups that dominated the mid to late 90s.

You just aren't hearing riff selections here as inspired or explosive as an In Flames, Dark Tranquillity or Soilwork nor the more crushing edge of the classic Swedish death. I give them credit for not just jumping on that old Sunlight tone bandwagon and sounding like a thousand other followers, but at times some of the grooves here are just as shy on imagination, and the few points at which the band delves into a more clinical and technical death metal technique also didn't convince me. Essentially Deathquintet feel too often like they're trying to feel out which of numerous paths to pursue without becoming committed to any one, and thus Godwork doesn't really excel at anything. The production is level across most of the instruments but it feels murky and demo-quality in places, and the lack of bright shifts or interesting transitions sort of bled the entire experience together, even though they do offer a broad palette of riffs. Guest vocalists like Tomas Lindberg and Joakim Göthberg serve only to render the normal growls less interesting by comparison, and most of the song titles and lyrics also seem bland and ambiguous...

"My Burden"? "For the Love"? "Nothing"? "Cross My Heart"? Seems like these were picked out of a hat of Pantera groove-metal/metalcore titles from bands in the mid 90s. I won't fault Deathquintet for aspiring to take on a more personal bent to their material, but this is another case for metal bands to break out a thesaurus once in awhile...try a metaphor, a unique image, something that forces the listener to think a little. The musical choices here are not those of slouches...these guys can all play their instruments, but seeing how they were doing the tie-wearing/dress shirt death metal schtick, I was really hoping to hear something crushing and appalling to contrast the image. Instead, and I hate to say it, but they seem to play into that whole corporate, predictable cubicle death metal culture that you'd expect them to kick the shit out of. It's not terrible music by any means, but relatively bland...unable to stand out against the already-rich legacy of Swedish death metal.