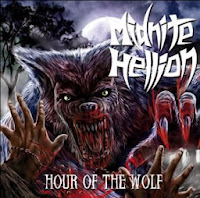 Hour of the Wolf is another of those cases in which I really enjoy a band's style and themes but just didn't feel like the songwriting on these particular tunes was ultimately all that impressive or memorable. From superficial details like the logo and cover artwork to the unique, piercing qualities of vocalist P.J. Berlinghof, who makes her debut with Midnite Hellion on this very 7", you've got a solid and compact entrant into the retro trad metal scene. The production here is bright, clear and crunchy as opposed to sounding like it was meant to be released in 1984, but when it comes to the riffing construction there is absolutely nothing here you would consider modern or innovative...which doesn't exactly hold it back from filling out its chosen niche, but the note progressions and patterns on parade too often feel as if they overly familiar and repackaged from a number of classics that likely inspired the New Jersey quintet in the first place.

Think late 70s Judas Priest or early Tygers of Pan Tang pacing infused with mid 80s US power metal circa Jag Panzer, Liege Lord, Attacker and Fates Warning. The first, titular tune is probably a bit more in the direction of the former while "The Morrigan" hovers around the latter spectrum, though both cross into each others' territory often enough. The rhythm guitars have a nice crunch to them, but whether chords or triplet trots, the patterns just feel like I've been there before and often wind up completely predictable. Melodies are thin, often seemingly panned into just one side that sets them on a different plane than the persistent rhythm, but I wish they were a little bolder and more effective; whereas the leads and bluesy metal grooves ("Hour of the Wolf") seem just about right, if they too suffer from a sense of derivation. Bass lines are corpulent and plunky and the drums have a nice balance of rasped cymbals and steady snares and kicks, but I never felt like there was much excitement. To Midnite Hellion's credit, these tunes, without becoming bloated, cycle through a few more riffing/tempo changes than your average heavy metal throwback, but I had a hard time remaining interested at any given point.

A lot rested on Berlinghof's performance, wavering and melodic but capable of a nasty bite, and serious serious enough to deliver these two tales of classic/mythic monsters. I'd probably compare her syllabic meter and pacing, especially in the verses, to the great Rob Halford, but she also brought to mind earlier Harry 'Tyrant' Conklin, especially the mid range stuff; and a fraction of Bruce Dickinson's leering madness. She does often pitch upwards but she's hardly a screamer, instead making due with her stronger range and helping imbue the songs with gravity as opposed to frivolous excess. The rest of the band provides a gang shout or two for emphasis, but she's easily the most compelling piece of the puzzle, and if they can sharpen up the riff set with some more curious, unexpected note phrasings and chord structures they could very likely make a mark for themselves beyond the obsessive 80s metal collectors likely to snatch the vinyl. However, you only need listen to the recent output of veterans Attacker and Warlord, or exciting younger bands like Enforcer, to realize that these tunes don't exactly strain themselves to be remembered. A little more time at the drawing board, perhaps a little faster riffing to complement the mid-paced choices, and this is one case of lycanthropy that could become more infectious with delivery.