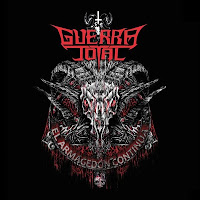 Colombia's brutal death scene has been reasonably well documented, even if it's still deep underground, but this South American nation has honestly had no shortage of metal from other extremities, particularly black or blackened thrash/speed, the latter niche being occupied by one Guerra Total ('Total War'). These guys have been churning out a new record each year since 2010 under this name, but had a fairly substantial history beforehand for about a decade, and I must say...they've been markedly improving which each release. This latest, El Armagedón Continúa, arriving through Sweden's I Hate records, fits in rather snugly with the scene emerging from countries like Finland, Canada, Sweden, Norway and the States, and while it's a little nastier than a band like Midnight, Speedtrap or Speedwolf, it definitely scratches a comparable itch to names like Antichrist or Deathhammer, perhaps even some of Sabbat's flightier infernalisms such as Sabbatrinity.

Granted, this is a legacy far older, with a lot of the riffing motifs lifted off classics like Kill 'Em All or Show No Mercy, cultivating the same general aesthetic once pioneered by Bathory, Destruction, Motörhead and Venom, but it's not something I ever seem to grow tired of as long as it's performed well. And, thanks to the raw but clear production choices on this record, I've had a lot of fun listening through it. Rhythm guitar progressions use a lot of the hammered, trilling hi-octane techniques you've heard in this particular field many a time, but combined with meatier mid-paced thrashing chord chugs, splayed out trad metal 4-chord backing patterns for an airier feel, and lightning melodic leads which seem slightly more controlled than the haphazard spasms you'd predict from the usual Slayer-philes. They also throw in some wah wah effects and others to build a real balance and atmosphere to the record that more than compensates for its generally raw mix and undercooked ideas. The vocalist has a pretty impish rasp going on, though I admit I prefer when he's singing in Spanish, it just drips with a more natural sense of character and malevolence...not that he's a slouch in English, where he sounds like a less pronounced Quorthon from the earlier records, but it doesn't give the material that same sense of place...like I don't feel as if I'm being run down through a rainforest by Satanic cocaine dealers with machetes...to whom I owe a great deal of money.

I actually quite liked the sense of 'distance' in the production, almost like you're listening to it in an empty futbol stadium, sitting too low to receive the brunt of the drums or rhythm guitars, but when those leads burst out in tunes like "Misanthropist God" they totally take over the space. The bass is a little low and in truth this is not a heavily 'low end' sort of recording, but it's enough that I can make out the lines, which are basically just following along with the rhythm riffs. The drums aren't insanely technical, which wouldn't fit this sort of nostalgic songwriting, but they're peppy and vivacious and blaze along at a strong clip and volume. Really, though, the production is going to turn off some and titillate others. You want brickwalled, dense Pro Tools melodic death/thrash that sounds like it was written in the 21st century?  El Armagedón Continúa is not likely to fulfill that desire. Nothing here is 'new', or for that matter very creative. But if you want an album to seem like it was recorded in the back of some van pimped out with spikes and machine guns, Mad Max-style, while the driver and passengers hurl empties out the windows in a rabid pursuit of their own Sentence of Death or Welcome to Hell, along the highway TO Hell, then Guerra Total has your number on speed-dial and they're crank-calling you for about 40 minutes of jeering, jubilant, incendiary entertainment. Poseurs and pedestrians beware! Hail speed! And hail Satan!