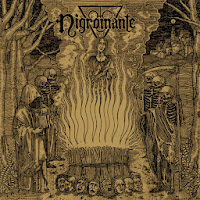 One of the greatest drawbacks of nostalgic heavy metal in the 21st century is the proclivity of its practitioners and followers to simply 'settle' for more of the same, as if fulfilling the base level requirements of a band 30 years ago is some sort of achievement. Don't get me wrong, I love to hear a group that can recapture the recording atmosphere of a bygone era and then write some fiery, passionate tunes which can stand their own test of time, but too often I've encountered well meaning acts that just can't grasp that next level...that authentic magic that made their inspirations so damned delectable in the first place seems to elude a lot of the younger bands, and that's a large part of why I wasn't able to get myself too stoked on the debut of Spaniards Nigromante.

These guys have an interest in playing some punchy, stripped down metal in the late 70s, early 80s tradition and putting their own stamp on it, but this has to rely heavily on the gruffer vocals than the riffing progressions which play out like others we've heard so many times before. I guess the best comparisons to make would involve the earlier records in the catalogs of Accept, Anvil, Running Wild, and late 70s Priest. Simple connect-the-dots chord patterns are given a slight injection of charisma due to the very sincere production faculties, grooving bass lines and then the gruff delivery of multi-instrumentalist Choco, who reminds me of a poor man's Chris Boltendahl (Grave Digger), or Tank's Algy Ward with that grumbled, oft constipated-sounding meatiness transformed by this guy's natural accent; though he's not beneath the assertion of some melody in lines like the verses of "In Nomine Pater". The guitar chops are themselves often threaded with slightly more complex picking sequences and grooves, and Choco also tears out a nasty, dirty bass tone that gives the rhythm guitar a more robust effectiveness, while the drums are feisty but relatively stock for the musical style...humble beats for humble riffs.

The issue I hear on Black Magic Night is that very often the best parts of the tunes are a few of the hooks in the verse sequences or bridges, whereas the choruses and supporting chords don't really evoke anything so memorable. Leads aren't exactly inspired themselves, just sort of tossed on with little other meaning than they belong as a component of the hard rock/heavy metal medium...sometimes a bit bluesy, but never difficult or mesmerizing. Built-in melodies like that at the start of "False Idol" are more interesting, even if the entirety of the songs aren't quite so compelling. I actually do like the sound of the rhythm guitar itself...fat and boxy and dominates the mix, but overall I came away from this with the impression it was sort of a standard bar metal record which was written around 1985 and somehow lost its way in the time stream. The only giveaway that it's more recent in origin would probably be those guitars, which are more straight to the face and less saturated in reverb or atmosphere than they might have been in that Golden Era of heavy metal. Overall, it's not a bad debut, and there's some appreciable variety in the riffing, but the old school stuff this emulates just relies so heavily on powerful, unforgettable hooks and choruses which Nigromante is thus far lacking.