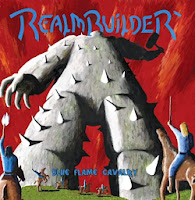 We've had no shortage of fantasy-themed metal through the decades, but NYC's Realmbuilder stands out to me for scratching a particular itch, a love of pulp, 60s-early 80s and/or young adult fiction that managed to conjure up a lot of nostalgia for this reviewer. I was instantly breaking out and prying open my old copies of the Chronicles of Prydain, Tripods Trilogy and many other imaginative works I hadn't revisited in years, and there's a real sense of mythos and mysticism to the concepts at play in the lyrics, as opposed to the generic Tolkien/Dragonlance-inspired tripe you get from a band like Rhapsody of Fire. Not that those Italians aren't fun musically, but the themes of their records feel like they were created with a Random D&D Campaign generator instead of the authentic sense of wonder I hear on Blue Flame Cavalry. Fuck, even the cover artwork to this disc throws me back decades to those old novels and RPG game manuals of my youth, and I've not been able to stop listening to this. It's not quite a flawless album, but really capitalizes upon the strengths of their sophomore, Fortifications of the Pale Architect, to create a seamless, picturesque, captivating escapism through cautious restraint and strong arrangements.

This definitely falls under that heavy/doom category, musically comparable to a simpler Manilla Road, a Lord Weird Slough Feg, or a less rotund and robust DoomSword, perhaps even a few hints of antiquated Manowar (first four records) revealed in the bombastic compositional style. Riffs are quite varied between open chords that help to seat the layered vocal arrangements, to busier proto-power metal progressions that pick up to a mid-pace, but nothing is necessarily complex or inaccessible. The real joy is that, while the chord patterns and melodies certainly aren't unique (a nigh impossible task n 2013), they feel honest and refreshing and consistently serve the escalating grandeur of the saga being played out lyrically. Realmbuilder doesn't exclusively take its time with you, but they're capable of plotting out a 10+ minute epic that never once devolves into boredom, thanks to the excellent placement of vocal choirs, leaden harmonies and a few instruments uncommon to the metal genre (trumpets, Ram's horn, etc) which help to round out the experience that the listener has been transported to this other time and place. There's also a great sense of balance and diversity between the tunes...the mellow balladry of "Adrift Upon the Night Ocean", for example, provides a smooth contrast against the siege-hymn "Advance of the War Giants" or the slower Sabbath stride of the titular finale.

The production is clean and laid back, with the drums and bass feeling like they migrated over from some obscure 70s prog rock record...in fact I was mildly reminded of some of my favorite Rush efforts of olde (Fly by Night, Caress of Steel). That's not to say the rhythm section is lazy, but it's not trying to overtake the guitars, which are played with a very mild distortion and not a lot of effects even on the harmonic segues such as that in "Advance of the War Giants". Levels are pretty much perfect for the atmosphere that the duo are chasing, with the vocals at the fore. That said, Czar's folksy everyman delivery took some adjusting to; the first few times I heard him, I wondered why they wouldn't just hire someone with a better range, but by this point I'm convinced that there could be nothing more fitting...you really feel like you're hearing these tales told from the perspective of a roving bard, forced to relay news and story from village to village just to earn a bowl of soup and a flagon of something to forget the trials of the road...not some operatic falsetto court jester in tights. Granted, when you figure in the choirs and backing vocals, it's a more accomplished and exotic mixture, but there's just nothing pretentious about Czar. YOU could sing these songs. I could sing these songs, and that's the brilliance of it...that's what makes this music so easy to connect with. Blue Flame Cavalry aesthetically approaches its lofty fantastic themes from a ground level...not from the back of a blazing dragon-mount while its radiant plate mail +13 blinds the onlooker.

It's only about 34 minutes long, but I never got the feeling that there was much else needed here. The tunes are all quite different in structure and length, and damned if they're not predictable beyond the fact that they are stylistically latched onto the teat of the fantastical concept. Realmbuilder is so freakin' humble that even the logo seems like a kid's scrawl on a notebook that might also contain doodles of wyverns and griffons, crystal balls and tumbling gnomes...youthful dreams captured in the amber of mature songwriting sensibility. Blue Flame Cavalry is a record I'll gladly pass off to my newborn when he's old enough for the Chronicles of Narnia, but one which I can also enjoy as I prep next weekend's tabletop wargaming session. Timeless and boundless in its ability to inspire raw imagination, and with these same basic ingredients, they could go almost anywhere. It's not the busiest or most proficient metal you'll hear in this or any other year, but it absolutely does not need to be...and while I have the feeling the duo hasn't yet arrived at its 'masterpiece', this and the sophomore are both excellent and come highly recommended, whether you've got your nose soiled by the ink of your umpteenth copy of The Hobbit, aroused by the mid-period works of Slough Feg and the Hammers of Misfortune, or you're the more 'recreational' sort of fantasist adrift in an acid mushroomland.