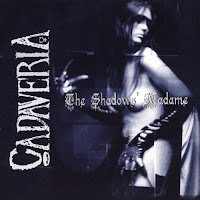 Opera IX was not a band with any real weak link back in its heyday, but if there were any member distinctive and striking enough to set off on her own solo career, it was frontwoman Raffaella, aka Cadaveria, whose gaunt, raven-haired presence and unusual vocals were a large part of the band's appeal. Not to take anything away from their overall style and songwriting, which was unique among the volleys of earlier European black metal, for its use of Gothic elements in ways not entirely mimicking peers such as Cradle of Filth, etc. But for whatever reasons now lie buried in the dust of indifference, a split took place after the Italians' third full length The Black Opera, and she and drummer Marcelo Santos parted with the rest, forming a new act around the singer's stage and studio persona.

They pursued a modified sound which is to most ears more accessible than the duo's alma mater, but not entirely rounding off the menacing, erotic striga edges of her past performances. The riffing and structure of these songs is a simpler and more familiar, perhaps a little less ambitious than they had worked with before, but not exactly mainstream in architecture. As the operatic intro to "Spell" dissolves, they lurch into these palm muted, chugging doom/thrash Candlemass riffs which work very effectively as Cadaveria shouts out an angry, vitriolic harpy tone similar to Nicole Lee of ZnöWhite obscurity or the late Dawn Crosby from Detente and Fear of God. However, there are also traces of black metal charge rhythms, and proto death metal tremolo riffing and a slight degree of classical note progressions woven through the material that keeps it fresh and expansive, and when she wants to turn up the heat she'll erupt into some blacker rasping vocal lines that seem like a more strained mutation on the higher pitched parts, although I have to admit I prefer those.

Elsewhere, The Shadows' Madame is a fairly well-balanced production with an appreciable level of proficiency, especially in Santos' drumming which retains a lot of the faster black/death metal components employed by the previous band. Bass lines are fairly average, but the rhythm guitar tone is rich enough to pop right out, and you get a lot of inflection to the chords, the climbing and falling patterns of the original guitarist Frank Booth. Leads aren't the most well-developed aspect of the band's sound, but they definitely bring enough frizzy and wailing rock & roll antics to offset some of their fatter supporting riffs. There's also this overall depth to the recording which makes them feel like a much larger band, yet they don't overdose on symphonic ingredients or other pompous aesthetics you might expect; this is a very pure, riff-driven record at its heart, with a subtle use of atmospherics or electronics and sound effects that serve only to underlie the grime and groove of the riffs. I can't promise that a lot of those riffs are individually very interesting, but combined with the subtle strangeness and Cadaveria's haunting angst they're lent a lot more personality than they might otherwise harbor.

For an album obviously meant to associate with the darkness and horror she'd long been working with, I can't say it really and truly delivers, at least not beyond the imagery evoked in the lyrics. It's much more of a straightforward, groove and burst of an extreme metal pastiche as opposed to an effort that can evoke the morbid fascinations and nostalgic rituals of bands like Mortuary Drape and Opera XI, nor the rich legacy of Italy's horror directors spanning back about 40 years before this. The Shadow's Madame is more of a vehicle for direct destruction, easier to digest without abandoning the extremity from which it was a borne, a hearse meant to spill its human cargo out on the red carpet of rock stardom rather than some desolate castle up in the hills where a psychotic nobleman waits to carve them up. As a post-Opera IX vehicle this album works well enough, it still sounds fresh and punchy behind the better vocal lines, and it's easily one of Cad's stronger works beyond the turn of the century.