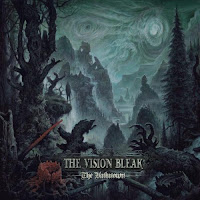 The Vision Bleak have been faithfully preaching the gospel of Gothic metal for 16 years now, long after the arguable summit of the style's popularity (i.e the H.I.M. and Type O Negative days) has eroded in the wake of other niches. And they've done it with hardly a single mar on their body of consistency. Full-length after full-length of equal parts atmospherics and rocking references to traditional horror literature (up to around the early 20th century) and classic film (a few decades later), dour vocal poetry and a public image that is in turn vaudevillian and endearing. This new record, The Unknown struck a chord with me for abandoning the band's kitsch cover motifs of the past for the transformed, alien vista of nightmares that it promises, and the questions that evokes...have the Germans changed up their style? Are they aiming for some sort of grand Lovecraftian concept?

For the most part, this is business as usual. The somber Sisters of Mercy inspired Gothic rock clad in more meaty, metallic guitars, sent back in time a century or two, with synthesizers and acoustics used tastefully to complement a set of dependable if not always entirely unique chugging and driving rhythms. The Unknown is mildly heavier in terms of drumming, speed and thundering riff structure, at least on a handful of tracks like "From Wolf to Peacock". If the band had changed its name to The Vision Bleak With a Vengeance, it wouldn't have been without merit. But despite its marginal sense of urgency, this disc has a fair degree of variation between it's murkier, Gothic doom swells "The Whine of the Cemetery Hound") redolent of Paradise Lost and the more urgent, aggressive material. Thick palm muted patterns perform a percussion unto themselves while the vocals and guitars drift above them, as if afloat between dark valleys of jagged rock and wolf-prowled pine groves, elevating tracks like "How Deep Lies Tartaros?" to seismic, sodden glories that I wouldn't have expected in their opening moments.

The true calms here are relegated to shorter pieces like the intro or the instrumental "Who May Oppose Me?", but these are all perfectly placed to allow the listeners a chance to breathe after what ever Transylvanian (or Victorian) terror has stalked them through the woods or streets. The vocals of both Schwadorf and Konstanz provide elegant, brooding mantras which assist even the most base of the guitar progressions to hypnotize beyond their due. Instruments are mixed very well. Production is polished, and complexity minimal, but the oblique nature of the lyrics (EXCELLENT lyrics) and note selections keep it from broader accessibility. That is not a negative. This is definitely not an album which has many sugary spikes of catchiness, even by comparison to some of their own past material. The songs all work rather well, both on their own and in unison, but it's the overall mood and imagination of this album that had me absorbed more so than its ability to compose some nuanced riff. You've heard a lot of it before, just not put together quite the way this duo accomplishes it, and The Unknown, while not the standout of their career, is another reminder of how a project's convictions can persevere well beyond the trendiness that might have provided them some grand entrance eons ago. Try and grab the version with the bonus disc, both of the tracks are also worthwhile.