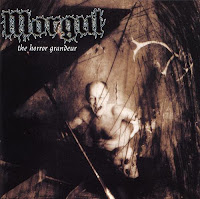 While both of its predecessors were solid, competent entries into Napalm Records' catalog of oft-forgotten black metal recordings, it was The Horror Grandeur which tipped Jack D. Ripper ever so slightly further into the limelight. A new deal with Century Media Records, an 'upgrade' to the sort of grotesque morbid photo art which was all the rage at the turn of the century, what many would consider vastly superior production values, and further acclimation to the symphonic ingredients that were increasingly incorporated into the form by more popular Gothic and black metal acts were all reasons that this might prove many listeners' first exposure to Morgul, even if it still failed to carve large swaths in its field.

While I personally acknowledge its limitations, in particular the rather predictable form many of the riffs take, I hold a soft spot for this record due to its unflinching horror noir aesthetics, the Grand Guignol nature of its presentation. The prior albums were good, but had a slightly harder time in snaring my attention, where this one caught it immediately upon the record crackling and doomed, melodic onset of the title cut. The entire record is staged like a carousel of corny theatrics, whimsical organs and even a couple King Diamond ringmaster laughs, meshed with spurts of atmospheric black metal circa Emperor, Limbonic Art or Hecate Enthroned, but it just sounds so great due to the clarity of the mix. The strings and keys sound vivid and bright, and Jack's occasional use of clean vocals soars off into the album's near-threatening nightscape akin to a lot of his Norse countrymen like I.C.S. Vortex.

There is a sliver of experimentation here, like the industrial beats used to fuel segments of "The Murdering Mind" or "Elegantly Decayed", which would also be explored on the subsequent Morgul offerings, all tastefully entwined within the morbid modus operandi, rather than creating a heavily eclectic or scattered style like on Arcturus' The Sham Mirrors a couple years later. I had mentioned Jack's clean vocals, but that's only one of numerous styles he incorporates. Roaring black metal rasps, wavering and eerie chants, breathy whispers, or whatever fits his mental asylum narrative. The bass is not an enormous presence throughout much of The Horror Grandeur, but it does keep its end of the bargain so that the album has depth across a number of frequencies. The drums successfully shift from the more traditional rock and metal patterns into the electronic areas and back seamlessly, with a bright snare sound that offsets Ripper's harsher vocals fairly well.

I had mentioned that the riffs lag behind creatively, and that's mostly the case, whether they're the traditional black metal explosions with tremolo picking, the blackened thrash parts, some of which even seem to mimic the presence of Ministry circa their Psalm 69 album. They're all functional and well-suited to anchor the delirious atmosphere Jack is creating here, but often too predictable and not intricately woven with catchy melodies or truly diabolic chord patterns that a lot of other Norse bands were bringing to the medium years before this. That said, the slower, graceful melodic doom passages which sparsely populate the album are among its most magnificent and memorable, and the rest are at least percussive enough not to disrupt the flow of the album or its haunted house aesthetics.

I feel like fans of Arcturus and Dimmu Borgir at the time would probably have dug this despite the fact that it's not as unique as the former nor as massive as the latter. It's actually the Morgul record I break out most often, whether that's around the autumn time of year or just when I'm in the need for an interpretation of classic horror themes through this style. Lyrics cover subjects like evil dolls and Poe-like death obsessions, eloquently penned to stick to the narrative structure of the music, and it's just one of those underappreciated gems which tread slightly left of the beaten path without setting any new trends, while mutant and elevating the one-man band into a form that could in some alternative timeline hold its own against its kin.