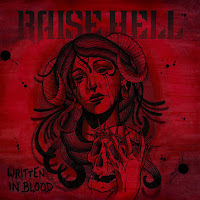 I was a little dismayed and concerned when I found out that there had been a Raise Hell record I completely missed last year; the former because nobody had really been talking up Written in Blood, and the latter because...I missed a Raise Hell record, and felt the cold, cobwebbed fingers of senility probing between my ears. Well, it turns out that there's a pretty good reason for both, because while this record returns a degree of the Swedish firebrands' furious Holy Target energy and velocity, it does seem to abandon a little of that ghoulish, haunted house charisma and face rocking hilarity that dominated Not Dead Yet and then resonated onto the two discs after that one, even if they weren't quite as excellent.

On its surface, this album is a stylistic doppelganger to what they've produced before. Harsh vocal driven murder thrash with convulsions of the death and black metal traditions that the band had mutated from early on. Largely in those same vocals and some of the drumming, or in the rhythm guitars that seem occasionally indistinguishable from other Scandinavian death/thrash or melodeath. The issue here is that while the note counts and the structure of these songs is comparable to prior efforts, so many of these tunes head right in one ear and out the other, largely due to exhaustion with so many well-rounded thrash acts possessing this level of competence and execution but not the capacity for memorable songwriting. Written in Blood is an able record if you just want to bang your head and possess audio evidence that the Swedes are still firing away, but the highlights are few and far between, and nothing like a "Babes" or "Nightcrawler" or "Dance With the Devil" really turns up.

It's not a total wasteland. Raise Hell have always understood how to induce some variation and balance to their LPs, and that exists here between pure ragers like "Dr. Death" or the Exodus paced "Six Feet Under" and more dramatic, melodic pieces like "A Blackened Resurrection" which are a little more successful as reincarnating the charm of older songs. Some tunes are little more than meaty, brickhouse thrash boredom like "We Arise", while others like "The Bell of the Reaper" are nearly worthy to be mixed in with better tracks from City of the Damned and Wicked is My Game. Clean guitars are used effectively in a few intros, acoustics glimmering before the distortion elevates the threat level. The rhythm guitars are constantly chopping and hacking like professional butchers, the drums circa the band's one new member to this recording are perfect, and Jimmy Fjällendahl's vocals remain consistently hellish throughout, though he lacks that raving, zany charm Jonas Nilsson brought out for Not Dead Yet.

Leads are proficient and timed right here, and there's no shortage of melody in general, but half of them are merely elegant rather than catchy. A lot of the riffing framework is structurally sound but inescapably predictable, and while that might have been par for the course with prior releases, they had those extra pieces of personality there to seal the deal, where this just seems a more soulless and obligatory exercise that impersonates its predecessors. Granted, it's been almost a decade since the band were releasing albums, and their scalpels might take a little dusting off. Written in Blood is by no means a bad record, and it has the same fixation on both slasher and classic horror themes that they've had since the earlier albums, but beyond a serviceable EP's worth of stronger content it just lacks the resonant engagement I had really hoped for a post-hiatus Raise Hell. Not a large misstep, but unlikely to be something I'd choose over the four older discs.