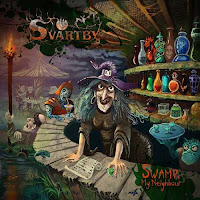 Svartby is a Russian band highly fond of Slavic and Swedish folklore, especially those aspects that go bump in the night, steal your children or are otherwise likely to hex and curse you. The colorful artwork they employ drowns the viewer in childhood nostalgia, storybooks, cautionary tales by the fireside, the kind of stuff that seems superficially attractive in this Autumn time of year, so despite my usual hangups with a good deal of what we dub 'folk metal', and some tepid former encounters with earlier albums, I decided to give their latest record a spin and see if I had been missing out on anything after all. I'm not averse to some fun foot stomping, Pumpkin Ale swigging entertainment if the riffs, lyrics and themes can support more than the skin-deep aesthetics they strive for, and I've yet to really meet the band that can effectively convey folkloric 'goblin' or 'nocker' metal without coming off like a bunch of confused, ironic weirdos, and not in the good sense.

So I'm pretty bummed out when I spin the Russians' latest record Swamp, My Neighbour and the first things that blow out of the speakers sound exactly like EVERY other European, charging folk metal band with the driving drums, predictable and majestic melodies, keyboards presenting atmosphere in the most overt, expected ways and a lineage that clearly owes more to Finntroll and Ensiferum than anything hinging on originality. This stuff should sound like demonic fauns dancing nimbly around a glade, or the cobwebbed laughter of an old crone, but it's just the usual glory-hounding cheese with the same Wagnerian swells and indistinct barking, hoarse black metal vocals deliver about as many chills as a warm bath. The riffs are largely just gallivanting chugs and melodies meant to imbue into the keyboards, never haunting or particularly catchy or even interesting. It literally sounds like they just let the synthesizer come up with the melody and then whatever the first palm-mutes they could produce were then set in stone as the bedrock from which the band would achieve its metalness.

I'm not trying to say that Svartby are terrible at this, because they possess the base level of competence to pull it off in time and a couple quirky uses of keys and female vocals that round out the sound to make it listenable. But this really just feels like someone obsessed with Finntroll, yet not willing to go the full distance and include less of the humppa music parts, though some tunes like "Bog Bar" definitely flirt in that territory. I mean, this is no Midnattens widunder, more of a mediocre descendant of Jaktens tid; so in that regard, they're more alike an Equilibrium or Ensiferum writing passable LARP music. The creepy creatures, elixirs and witching ways that the cover artwork hints at are relegated to the lyrics alone (which are decent), and never manifest with any spooky progressions of chords, notes, not even the vocals which are as banal and blunt as their harsh inflection can get. A few later tracks like "Clock Tower" are catchy enough that I wouldn't want to skip through them, but not in the way that the outward aesthetics of the band would hint at, and that's really the biggest disappoint I feel here, another folk metal band that thinks everything needs to be a dance party in Medieval shoes. File 'em away with Trollfest and just stick to the original.