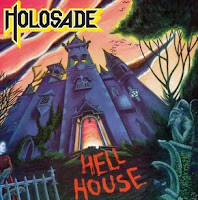 Another casualty of the saturation of thrash metal throughout the later 80s, England's Holosade managed to slip past the radars of many listeners without doing anything particularly wrong. Hell House is an attractive package with its creepy cover manor that hints at a brand of horror metal that I always appreciated during those times, and even if I haven't got a whiff of a fucking clue what the band's name meant, it was actually pretty cool. The UK was hardly a hotbed for thrash like it had been for the genres that were influential to that medium, only a few stronger bands like Xentrix and Onslaught, and the once-godly Sabbat were in regular rotation for me. Yet there was always some faint hope of a further savior that might waltz in and do Megadeth, Anthrax or Slayer numbers, blowing up that scene, which never manifest, certainly not in Holosade or other unknowns like Arbitrarer and Deathwish.

Now I had hinted that this outfit hadn't made any major missteps with this debut, and I think the real issues were just its presence on a nearly invisible record label, and the fact that it comes across like an also-ran when compared to a lot of bands that used its formula to craft more exciting, memorable songs. At it's most thrashing and biting, the guitar tone reminds me a lot of a brasher alternate to what Anthrax were putting out around this time, and a similar comparison can be made to the inflection on some of the vocals, which aren't a far cry from Joey Belladonna even though the range sounds more like a punkish crossover and not so melodic and reedy. There were a few individual lyric lines and riffs which also recalled old Death Angel, and a substrate of crude speed metal which reminds me of the rougher production on some of the early Exciter albums. The vocals do have a bit of an unevenness to them, even from track to track. That's not to say they lack personality...only it's just not a sort of charisma that resonates long after the record is over, even when there are shouts to back it up and drive it home harder. At worst they feel slightly sloppy, but not unintentionally.

I do like the rhythm tone, something not a lot of bands would try getting away with today unless they were striving for the low-fi retro aesthetic, but bright and nasty all the same and wouldn't be out of place on a punk record from the same time period. Bass lines are exceedingly simple and do little else but climb around the primary riffs, and not very far, but at least you can make it out and it keeps a steady headbanging pace circa classic Priest. The drums are vibrant and fit just right against the rawness of the guitars, and there's a lot of double bass energy driving the snares and the blunt force of the songs as a whole, with fills flying off everywhere that are occasionally even a too loud and cluttered for the mix. Leads and melodies are spurious and scattered appropriately throughout the play length, but this was probably one of the record's biggest failings since none of them even border on evoking anything emotional or catchy, so they feel like an obligation more than a carefully constructed component to the songwriting, a mediocre pizza topping with just enough added savory flavor to feel as if it belongs.

Though the lyrics in cuts like "Welcome to the Hell House" and "Madame Guillotine" are solid enough to convey the band's appreciation for horror and dark history, another downside to Hell House is that it just never feels scary or evil. It's more like a mixture of enthusiastic Bay Area and New York thrash reduced to a series of unambitious riffing passages and chord progressions that hardly even come off cruel or vicious by 1988 standards, and since they lack a lot of the inherent musicality of their betters. If you just took "Alison Hell" alone off the Annihilator debut, it has more quality guitar work and faux-creepy vibes to it than this entire album. The only atmosphere provided is just through the production alone, and so it's one of those records that really only comes up when you're digging into the deep, dark corners of the niche and want something tonally genuine to that period. It's not a bad album at all if you just want to crank some raucous 80s testosterone through your speakers, and a few tunes like "Nightmare Reality" storm harder than the rest, but you were simply not short of options in those days, and you definitely aren't now...so it kind of just wanders through its own hellish gates and disappears before you know it.