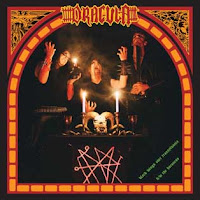 I don't think it's any big secret that Australians Dracula are a group openly paying tribute to the earlier works of King Diamond and Mercyful Fate, so let's get kick the elephant out of the room right up front: Dracula sounds a lot like King Diamond and Mercyful Fate. Foremost, the vocalist uses the same falsetto style as the man himself, although you might pick up on marginal differences due to the Count's underlying accent and natural timbre. There's also the intentional implementation of dingy, throwback production values that strap the two tracks here into an 80s time machine, for better or worse. They're not just about aping the actual musical style, but relying heavily on their audience to share in the nostalgia. Do you remember the first time you heard Fatal Portrait? Melissa? Don't Break the Oath? Where you were? What you were doing? Who you were with? What shoddy cassette deck or record player you were using? I'm not at all trying to exclude younger fans who first encountered the Danish gods on CD or in digital format, but Black Wings Over Transylvania is certainly a 7" which seeks to dredge up the flaws, imperfections and by extension the personality of those old recordings and the environment in which they were initially experienced.

Tinny, dramatic rhythm guitar hooks draw a mix of comparisons to Denner, Shermann and LaRocque, at times swerving a little more closely to the playing of one or the other sides of the KD legacy but ultimately finding a happy medium, with both the meanness of Fate and the gloss and glamer of the solo band. Fed from the same trick or treat basket of NWOBHM, speed and proto power metal as their influences. Leads are even airier, tinny and piercing, and they use a lot of briefer flights of melody to glitz up the verses in the title track. Bass lines here are a bit primitive and tend largely towards just pumping along with a few notes misplaced from the rhythm patterns, par for the course of their times, but not terribly significant. The drums are solid in the first track but felt a bit more cluttered in "The Baroness", largely because that has a looser structure through part of its run where the guitars are drawing atmosphere unto themselves. Count Hawlok's falsetto doesn't deviate much, it's tonally appropriate to the brightness of the guitars below it, but he doesn't intersperse a lot of lower-range, grimy character here like Diamond does on some of his classic recordings, nor does he shriek out much by the way of the memorable lines that built a 35+ year career for their forebear.

As drifting back ground music, Black Wings Over Transylvania is a passable paean to the masters which doesn't really suffer from any delusions of purpose, but where so many such loving Xeroxes of classic records fail is that they don't write music that can really stand on its own beyond just that niche crowd which is looking to catch up with its childhood through a source other than the one that was....you guessed it, actually there during that childhood. Kingdom Come might have borrowed the aesthetics of Led Zeppelin to an unhealthy extent, but at least for a few years there they were writing absolutely fantastic songs in that style. Primal Fear has more Priest in its DNA than some might wish to admit, but they put such power into it that it occasionally felt like you were hearing the original at a new, contemporary level. Put quite bluntly, there is absolutely no reason whatsoever to listen to these two songs when you've got a copy of anything Kim Peter Bendix released in the 80s on hand, because even the least impressive songs of that hot streak eviscerate anything in these two. That's not to say that I think Dracula are bad, or that the material has any major issue beyond its obvious derivative nature, but when you've already got groups like In Solitude, Portrait, Attic and Trial which managed to start with such a strong KD/Fate influence and then spin off into fresher strains, a project like this faces a steep uphill battle, one it hasn't yet even begun to scale.